Grammy-winning composer Eric Whitacre spent three days working as an artist in residence at the University of West Florida with students in the College of Arts, Social Sciences and Humanities April 20-22. 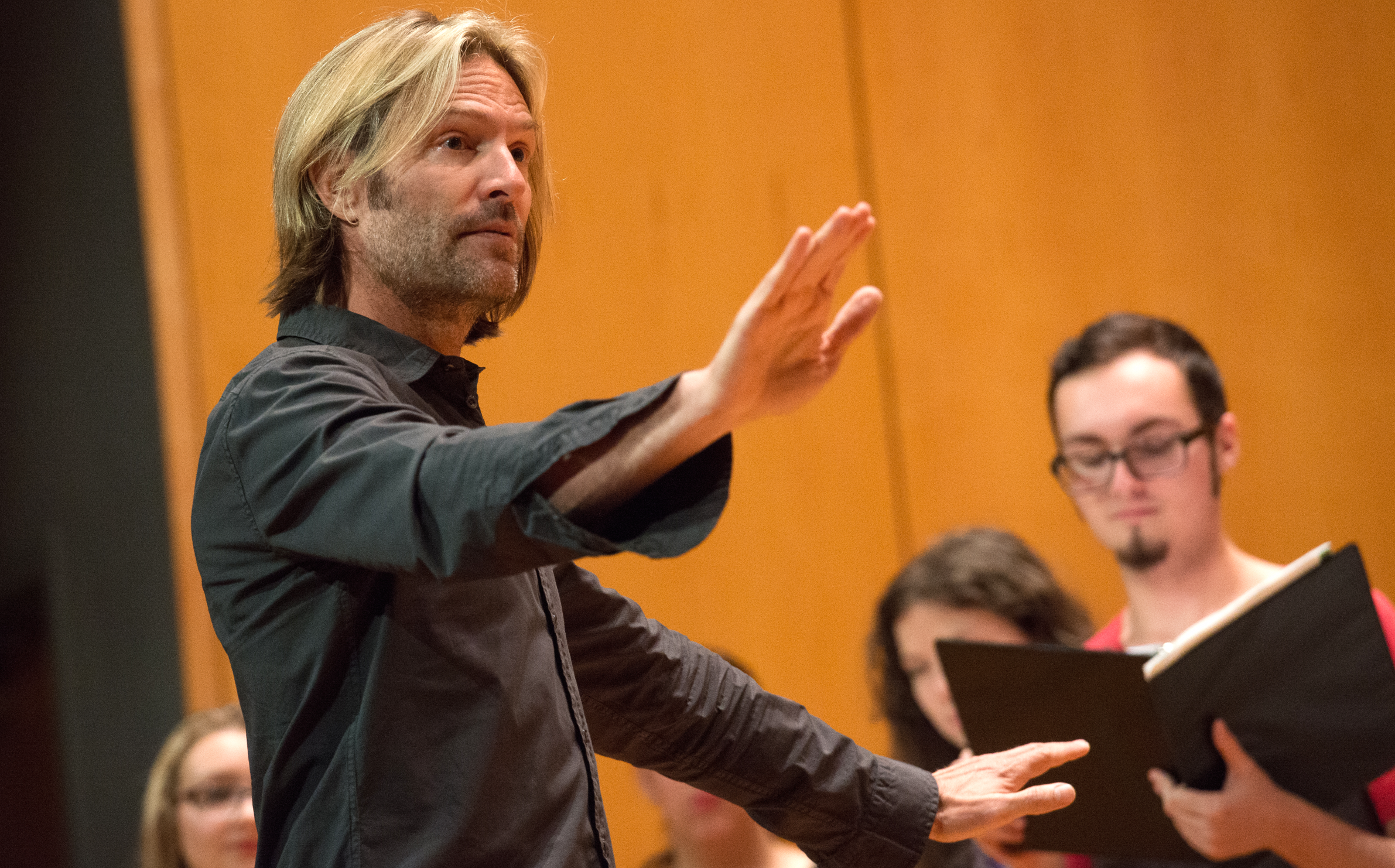 He conducted a rehearsal session with the UWF choir, participated in question-and-answer sessions and delivered the keynote address for the Downtown Lecture Series.

“To be able to get into a composer’s mind and hear his exact thoughts was an amazing experience that took everything to an entirely new level and changed the way we communicate with music,” said Nyasha Brice, a junior majoring in music performance.

Whitacre, a composer and conductor, is one of the most popular musicians working today. His concert music has been performed throughout the world by millions of amateur and professional musicians alike. As conductor of the Eric Whitacre Singers, he has released several chart-topping albums including 2011’s bestselling “Light and Gold.” 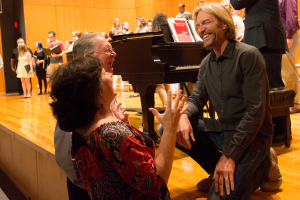 Eric Whitcare greeted fans before the start of the presentation.

A sought-after guest conductor, Whitacre has conducted choral and instrumental concerts around the world, including sold-out performances with the London Symphony Orchestra, the Royal Philharmonic Orchestra and the Minnesota Orchestra. He also collaborates with Hollywood composers, such as Hans Zimmer, and has worked with British pop icons Laura Mvula, Imogen Heap and Annie Lennox. He is a graduate of the Julliard School of Music and recently completed a five-year term as Visiting Fellow and Composer in Residence at Cambridge University.

“It was such a treat to have him,” said Dr. Peter Steenblik, director of choral activities. “He was totally focused on the students. It was thrilling how much energy he showed in helping them understand what it takes to succeed in so many different aspects of the music business.”

After the rehearsal session with the students, Whitacre spent about 35 minutes answering questions. He spoke about overcoming writer’s block and how he goes about creating a composition, which he described as evolving from a “blobby” sketch of the piece’s emotional journey. 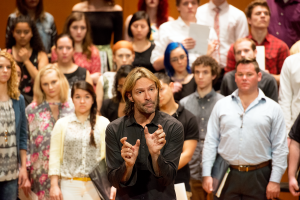 After his rehearsal with the students and at the lecture series, he showed a short video that explained the creation of his online Virtual Choir, a digital project that combines thousands of user-submitted videos into one single choral performance. Whitacre told students and the audience at the lecture series he plans to continue with a fifth Virtual Choir performance as soon as he finalizes an idea and works out funding issues.

“I want to do something different,” Whitacre said. “It’s not just about getting bigger and bigger; it’s about doing something that will have an impact in a creative way.”

Whitacre grew up in in the Midwest, and though he wrote pop songs during high school, he never joined a choral group until he was an undergraduate at the University of Nevada, Las Vegas. He said it was at the second rehearsal of the group that solidified his love for music.

“Everyone took that collective breath, and I started to shake,” he said. “It was like being part of a cosmic Swiss watch. I was hooked on being involved with something bigger than myself.”

This article is part of a collaboration between WUWF and the UWF Center for Research and Economic Opportunity.