University of West Florida President Martha Saunders presented her first State of the University address today, looking back on the University’s recent accomplishments and providing an overview of her vision for the future. 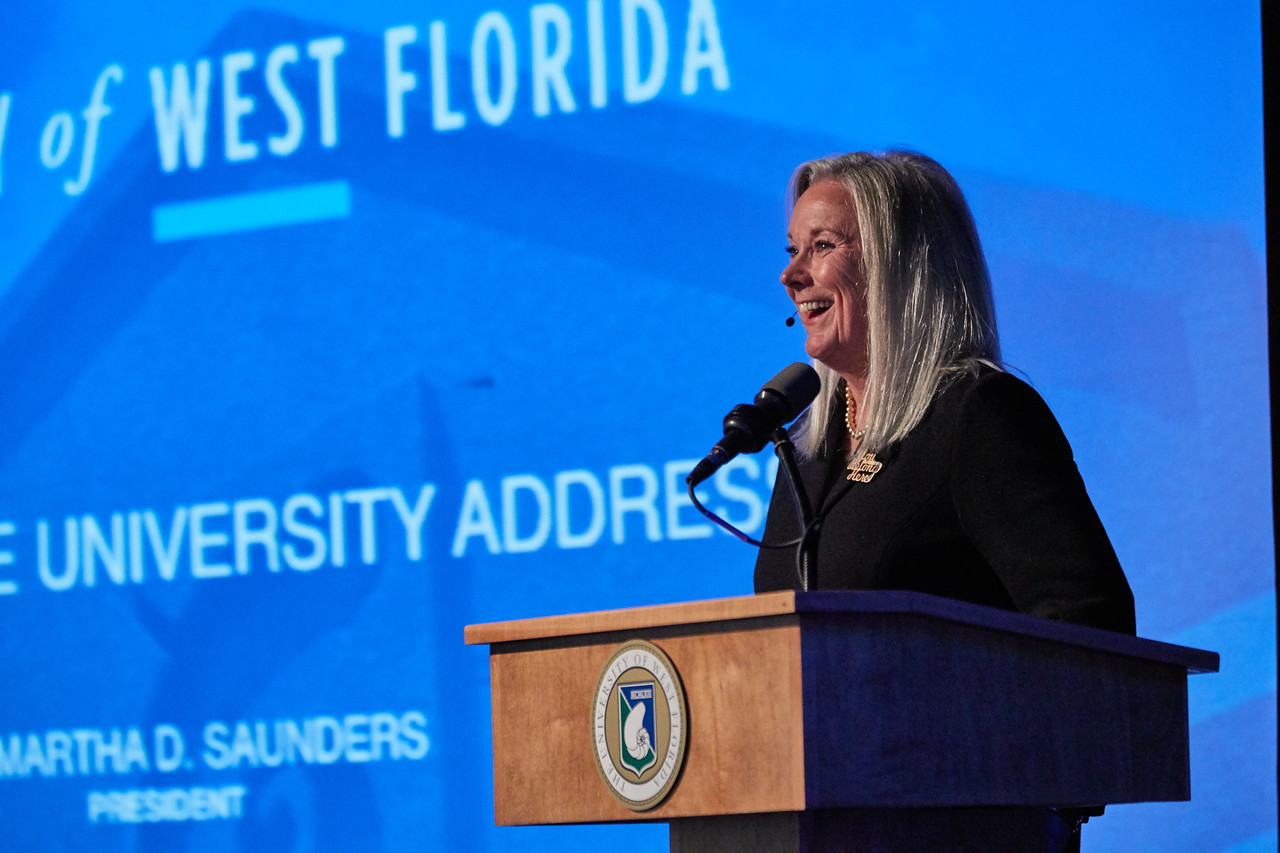 Saunders opened her address by highlighting UWF’s 50-year history, as it has grown from 1,200 students to more than 13,000, with 59 graduates in the inaugural commencement to more than 1,500 in Spring 2017. She linked the University’s growth to the Greek myth of Jason and the Argonauts and their voyage to find the golden fleece.

“Like the crew of The Argo, we have traveled a adventurous journey since our establishment in 1967,” Saunders said. “After 50 years, we are living our vision as a spirited community of learners launching the next generation of big thinkers who will change the world.”

Saunders noted several major gifts received over the last year as part of the University’s historic 50th Anniversary Capital Campaign, including a $5 million gift from Dr. Usha and Mahadeb Kundu to support and name the College of Health. In total, the University raised more than $62 million, exceeding the campaign goal of $50 million.

UWF is the first public university in Florida to make all print textbooks for 1000-4000 courses available through the UWF Libraries, and the University’s second consecutive student government association president was named the student representative on the State University System Board of Governors.

Saunders shared her vision to make UWF a destination “where the community wants to be.” She noted that the 50th Anniversary is a unique milestone, marking the University’s time of transition from its beginning to what it will become into the future.

In the upcoming academic year, the University will launch a number of strategic initiatives including: iHire UWF, a marketing campaign to connect students with employment opportunities; the Reubin O’D. Askew Institute for Multidisciplinary Studies; expanded offerings in cybersecurity and supply chain logistics; UWF Global Online; and more.

Saunders also mentioned the UWF Innovation Campus Network, a transformative university-community partnership model that will include living-learning communities, disciplinary and research labs, industry partners and projects that impact the Northwest Florida region in a positive way.