Pensacola – The Department of English at the University of West Florida recently celebrated the release of this year’s edition of the Troubadour, the University’s student-edited annual literary journal. 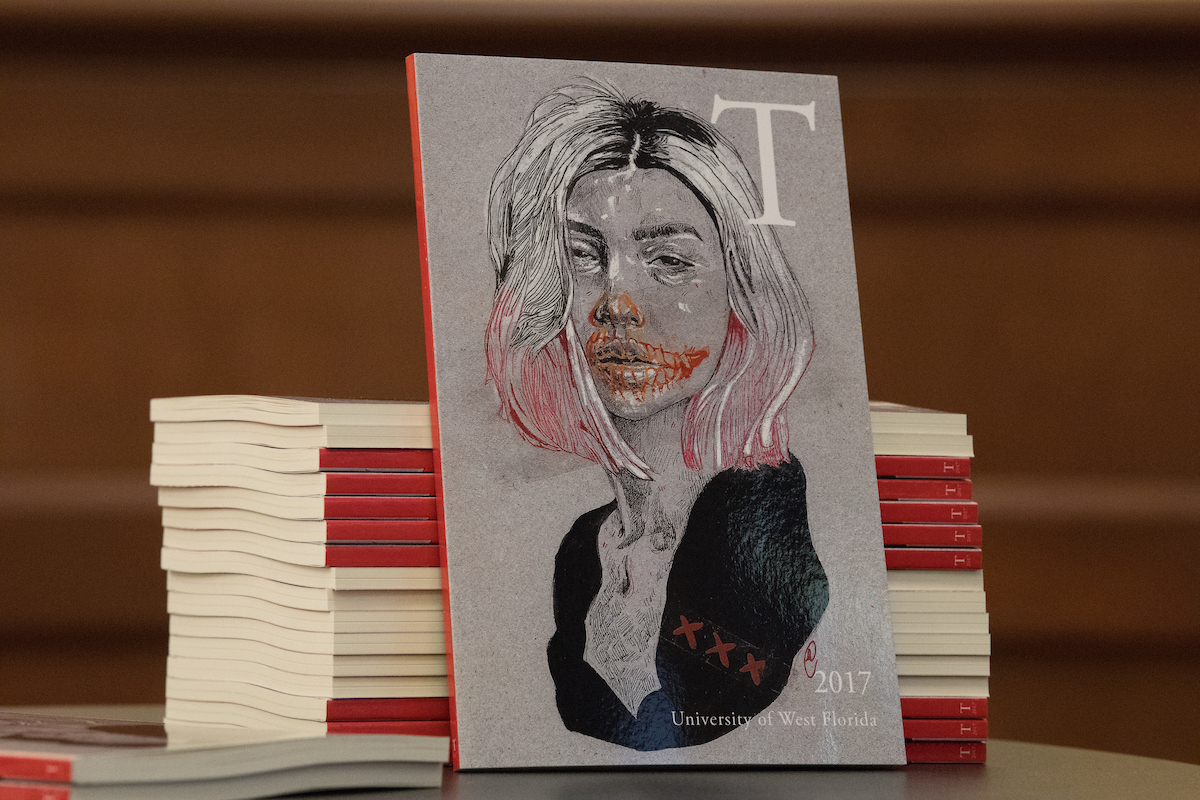 Students featured in the journal had the chance to talk about their work and read it out loud in the Argonaut Athletic Club at UWF. A brief reception took place before the readings, during which attendees had time to read a new copy of the journal while enjoying appetizers.

Dr. Greg Tomso, English department chair, Jonathan Fink, professor and director of creative writing, and Terry Griner, this year’s editor of the magazine, welcomed everyone. The readings were meant to highlight students who contributed to the printed edition of Troubadour.

Troubadour is funded by the English department and features creative writing and art by UWF students of all majors.

The publication has been a UWF staple since at least 1987, which is the earliest edition the University has in the archives. Since then, it has evolved from black and white to full color, and the amount of submissions has significantly increased, as well.

Fink, who serves as advisor to the magazine, also assists students with publishing. However, the editorial team, consisting of seven graduate and undergraduate students, does all the editorial work.

“I’m very happy with the way the printed edition has evolved over the years, and I am especially happy with this year’s version,” Fink said.

“We are expanding the number of student pieces in the journal, and over the last few years we have moved to offering perfect binding, full-color glossy inserts for the art as well as a color, glossy cover with faux French flaps.”

During the readings, students talked about what inspired them and how they view their creative outlet as a form of mindfulness.

“I’ve been writing poems since third grade,” said Anesia Saunders, contributor who wrote an untitled poem for the journal. “It’s kind of therapeutic for me.”

Other students talked about how personal experiences led them to write their stories.

“My creative non-fiction piece tells the story about my grandfather before he passed away,” said Melissa Pisarski, a senior majoring in journalism.

Michael Mobley, creative writing graduate student and contributing writer, explained why it is important to read his work aloud to the audience.

“I think it helps us to understand the performing nature of what we’re writing,” Mobley said. “Getting up here and actually speaking, it gives us an opportunity to hear ourselves.”

This year, the selection process was tough, Griner said, because the student editing team received more submissions than usual.

“The decision was not easy,” Griner said. “Even though we had great submissions, we had X number of pages to fill. So we had to be very selective.”

Joey De Celles, a freshman cybersecurity major and a Troubadour contributing writer who wrote a short story called “The Policeman,” said the journal was a great way to bring out creativity in students.

“It’s a showcase, that’s what it really is, and I think it’s really important for students to see that,” De Celles said. “I was told they were being really picky about their selection process, and just the fact that I made it in makes me feel astounded, makes me feel really proud of my work.”

During the submission process, students give their work to the editing team. Then, the editorial team reads them, and they meet to discuss and evaluate them. Students can apply to contribute in five different categories: fiction, non-fiction, photography, poetry, and 2-D art.

This year’s cover features art by Jasmine Holmes, senior fine arts major. A lot of the work she does is inspired by nature and mythology from around the world. Both of her works in Troubadour focus on myths from the West. She made those while she was in Ireland over the summer on UWF’s Irish Experience program.

“I was just told that I was going to be in the magazine,” Holmes said. “I walked in and saw I was the cover. It was a really big honor.”

Griner and Fink concluded the readings by thanking all contributors and reminding the audience that submissions for next year’s edition are due during the Fall semester.

The magazine can be found at the Commons and the Writing Lab in Bldg. 51 on campus, the English department office in Bldg. 50, as well as at Starbucks near campus.