Many types of retailers typically see the majority of their annual sales occur during the holiday season, with December sales always higher than any other month. The term “Black Friday” was originally an inside term used by retailers to reflect that annual profits in the industry didn’t begin to occur until the Friday after Thanksgiving. Today retailers use this idea to expand the traditional shopping season of one month by beginning sales much earlier in November. Yet December sales still remain the highest in many locales.

December retail sales data paints an interesting picture for the Pensacola metropolitan area. Because of the large visitor population, summer sales are often higher than holiday sales. This fact is becoming more pronounced as visitor numbers continue to grow. 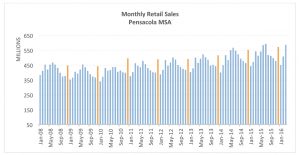 These numbers, however, are also a bit misleading. Because sales tax is collected on items other than purchases at stores, such as restaurant meals and hotel rooms, the amount of tax in the summer months swells due to visitors’ need for shelter and food rather than necessarily their desire to go shopping. This is reflected in the kind of items being purchased during the different months.

To illustrate, the table below provides data from different retail sales types for Escambia County in 2014. The table compares June purchases with those made in December.

As the numbers reflect, there is a pronounced seasonal effect in Pensacola on retail purchases for these categories. Visitors have a definite impact on total retail sales but not all product categories are affected equally. And the same is true for the holidays.

A second impact of the holidays is the increased employment opportunities it brings. The sheer numbers of people making purchases in a relatively short holiday time frame require retailers to hire larger numbers of workers, resulting in fourth quarter employment by retailers in any given year always spiking above employment levels in the previous quarters. 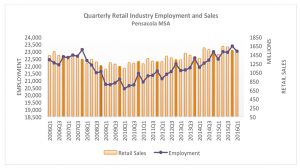 While the magnitude of the change may vary, retail employment in Pensacola is invariably at its highest in October, November and December.

This year, the National Retail Federation October 2016 forecast survey for the holiday season finds that American consumers plan to spend an average of $935.58 during the holiday shopping season this year, with told sales predicted to rise 3.6 percent. Additionally, the study reports that 58 percent of consumers plan to buy for themselves, spending an average of $139.61, and marking the second-highest level of personal spending in the survey’s 13-year history. If this prediction holds true for this area, then local merchants may expect to see some holiday cheer from their sales figures.

Phyllis Pooley serves as director of special projects with the University of West Florida’s Office of Economic Development and Engagement in Pensacola.