Pensacola –About 25 students milled around the lawn outside the University of West Florida Center for Fine and Performing Arts Nov. 20 offering suggestions and asking questions as they created a one-fifth scale model of a medieval cathedral. 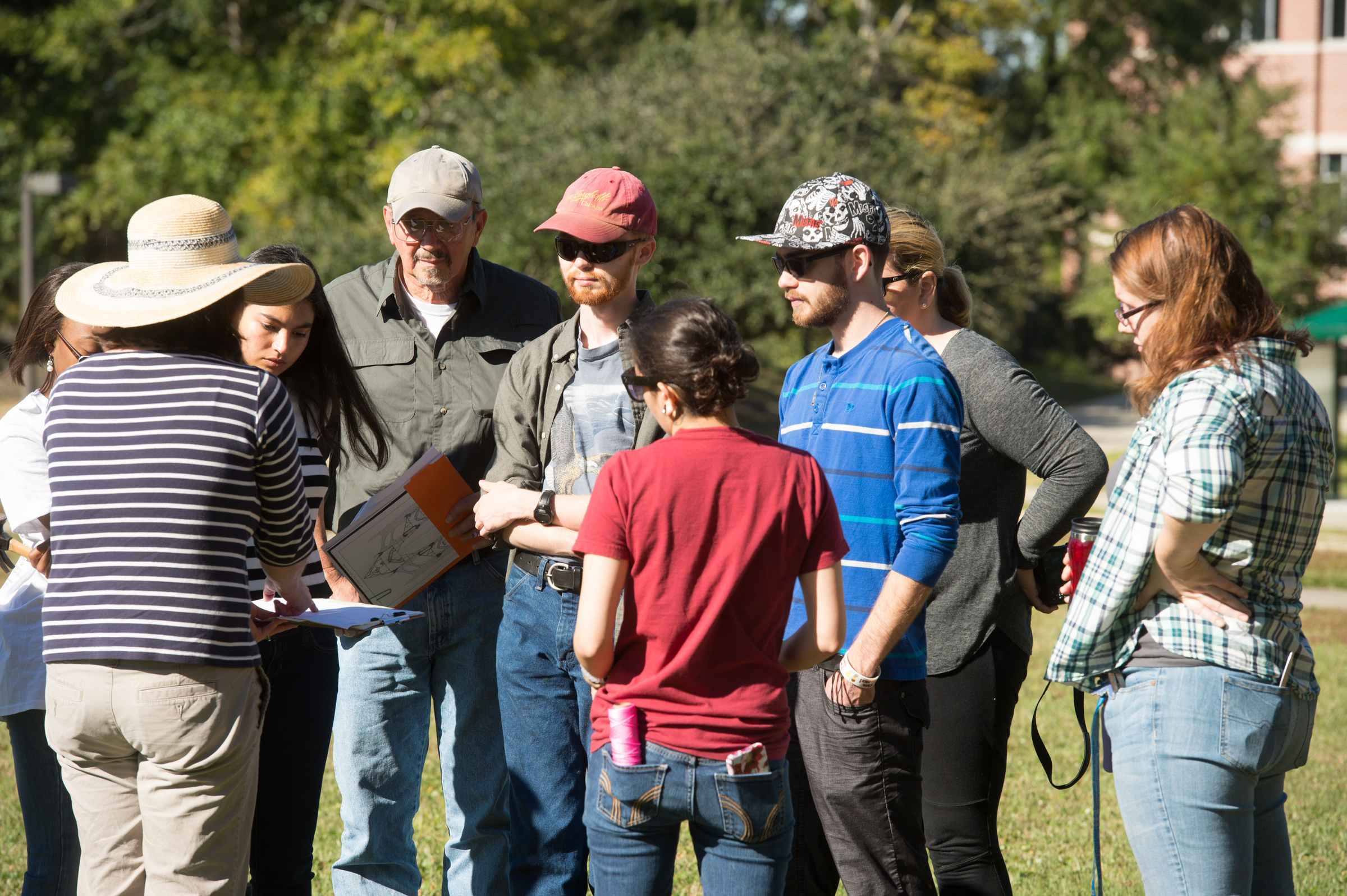 “Cut how much string?”

“Move a little to the left.”

“It’s fascinating,” said Kristina Davis, a senior studying graphic design. “We get a chance to learn about the concepts and visual effects during the actual making of something … we need scissors over here.”

As students consulted renderings on graph paper, unwound string, placed tape and pounded stakes into the ground, Dr. Jennifer M. Feltman, visiting assistant professor of art history, supervised. She organized the event, “Ad Quadratum,” for her art and architecture class. “Ad quadratum” is Latin for “from the square,” which was used to derive the golden section – the element of design that gives balance and aesthetic appeal – in many cathedrals.

“One of the many benefits of doing something like this is that it makes math accessible,” Feltman said. “Also, it’s about doing. It’s about figuring things out. If something doesn’t work, you try something else. Students work in groups, and they are using logic.”

While her class estimated angles, tied and re-tied knots, and positioned strings, Feltman asked questions, dropped hints and referenced television clips and lectures about French and English cathedrals, specifically the cathedral of Amiens in the Somme River Valley north of Paris.

“Everyone gather here for a minute,” she said.

As the students put down their tools and crowded around, Feltman crouched and walked slowly to demonstrate the pomp medieval clergy might display upon entering the cathedral and moving down the nave. The students peppered her with questions about definitions of penitence and details of liturgical ceremonies. 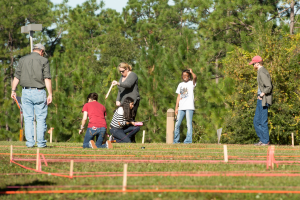 Feltman said she wants student to consider ways that art and architecture from the past continue to shape today’s world.

“The goal was to show that geometry is fundamental to gothic design, and knowledge of geometry was passed down from master to apprentice via actual practice,” Feltman stated in an email. “Some of the background reading that we did to prep for this activity, includes a chapter from Robert Bork’s book, ‘The Geometry of Creation,’ in which he argues that drawing and the design process are fundamental to the gothic aesthetic. Relevant to our activity, he also argues that Gothic design was so little understood in Renaissance and later periods because it was hard to put into words (and tedious to read) geometrical exercises. Rather these were learned through the process of drawing using compass and straight edge. And the designs are about the internal logic of geometrical drawings that make most sense when one is actually drawing. So medieval masons were active learners.”

Research indicates that class time devoted to activities such as the re-creation of a cathedral can emphasize student engagement, said Dr. John Pecore, associate professor in the College of Education and Professional Studies at UWF. Engaged students can be more likely to understand concepts and apply them across disciplines.

“I am not an art history major,” John Lhotka, a senior, said as he reviewed a sketch of a cathedral so he could advise his group. “I’m in graphic design, but I can see that doing something like this could give me a lot of ideas about the placement of certain shapes or elements within a given space.”

Students work on a half scale model of a medieval cathedral in Dr. Jennifer Feltman’s art history class.

His classmate, Rebekah James, a senior who is majoring in art history, pointed out the practical applications and cross-curricular aspects of the cathedral project.

“Think about it.” James said to her group. “It’s about problem solving. Oh, now I just remembered something we studied in physics class.”

Feltman stepped next to James, and they discussed force and acceleration. A few moments later, James picked up a hammer.

Feltman specializes in the art and architecture of medieval Europe, circa 1100-1300A.D.

She was awarded a National Endowment for the Humanities Summer Stipend this year for her book “Moral Theology and the Cathedral: Sculptural Programs of the Last Judgment in Thirteenth-Century France.” The book, and a companion website featuring high-resolution images, will highlight the learning associated with the rapidly growing University of Paris and how this training of clerics shaped the visual imagery of cathedrals throughout northern France.

She is also editor and contributor to the book, “The North Transept of Reims Cathedral: Design, Construction and Visual Programs,” which will be available next year from Ashgate Publications.