Pensacola – While it may be beautiful in a home aquarium, the aggressive and fast-reproducing lionfish is wreaking havoc in the ocean ecosystem and endangering reef habitats.

But there might be a way to keep the lionfish in check: by eating it.

Researchers and restaurateurs in Northwest Florida are looking at ways to price and prepare lionfish dishes. In fact, the fish is already on the menu at some Pensacola restaurants.

“This is a question of biology versus economics and how they affect one another,” said Dr. William Huth, professor of economics at the University of West Florida.

Huth and a team of researchers from Appalachian State University are surveying consumers to find out how much they’d be willing to pay for lionfish and whether the knowledge that their meal is environmentally virtuous would get them to pony up a little more dough.

“We knew a market for lionfish existed, but would consumers pay more?” he said. “Would they put a premium on the price of the product if they knew they were doing good for the environment?”

Meanwhile, local restaurants, such as HopJacks Pizza Kitchen & Taproom, are already selling a lionfish dip as an appetizer, thanks in part to new appliances and techniques that enable chefs to debone even the smallest catches.

“We are looking at three invasive species to target and turn into commercial and consumer products,” said Joe Abston, who owns HopJacks, as well as Pensacola restaurants Tin Cow and Pot Roast and Pinot. “The Asian carp, flathead catfish – and our first product will be lionfish dip.”

Native to Indo-Pacific waters, the lionfish is a reef dweller with venomous spines that feeds primarily on other fish. It is believed to have been introduced into U.S. waters in the 1980s and has now grown to a very large problem along the southeast Atlantic coast, throughout the Gulf of Mexico and into the Carribean.

“On coral reefs, invasive lionfish have been shown to reduce recruitment of native fishes by nearly 80 percent over a five-week period; similar predation rates in estuaries could have major, yet undocumented, effects, particularly for species that rely on estuarine systems as nursery habitat,” states a 2011 study from Florida International University in Miami. “The continued presence of lionfish in estuarine nursery habitats may threaten the early life history stages of a number of commercially, recreationally and ecologically valuable fish species.”

In its natural waters, it is kept in check by various predators. But the lionfish has no known predators in the Atlantic Ocean and Gulf of Mexico.

To try to find how much diners would be willing to pay for lionfish, Huth spent over $6,000 to conduct an experimental economic market at the annual Pensacola Seafood Festival in September.

“We set up a booth, like any other vendor. But we offered lionfish on a bid to consume basis,” Huth said. “It was an auction system from which we could get statistically valid results.”

Visitors to the booth willing to participate in the experiment were each given a “$10 endowment” for use in purchasing cooked lionfish, and Huth used three different types of information treatments to inform consumers about the lionfish threat. One group was given no information (the control); another was given information about how consuming lionfish could help the local economy; and the final group was given information about the possible detrimental effects of lionfish predation and the possible extinction risk to popular seafood species, such as grouper and snapper.

“We made it clear to them that this was their $10 to keep,” Huth said. “They could use it however they liked and one option was to purchase a 3 ounce filet of lionfish.”

The three groups were then invited to bid on how much they were willing to pay for the lionfish filets the research team had prepared using a sous vide cooking method. If their bid was equal to or above a randomly selected price, they received the fish and paid their bid price pocketing any difference and if their bid was less than the random price they did not get the fish but kept the money.

Preliminary results, which Huth hopes to publish next year, confirmed that lionfish could be sold at a higher price than other seafood products.

“We found significant evidence that people would be willing to pay in excess of $30 a pound for lionfish,” Huth said. “It appears that they felt that the premium price was worth it knowing that they had done something good for the environment.”

A willingness to buy might not be the only obstacle facing human consumption of lionfish, however. While the supply is there and demand is growing, the techniques for commercially harvesting lionfish aren’t.

“Lionfish are hard to get into the supply chain because they are hard to catch in quantity,” Huth said. “This is not a fish you can catch with a rod or nets. They have to be cleared off the reefs by divers using hand help spears or by trapping them.”

It’s a labor-intensive process, and although the return on the fish is there, the limited supply hasn’t made it commercially attractive yet.

“Lionfish measure anywhere from three to 15 inches on average,” Huth said. “A 15-inch lionfish weighs about 2 pounds, but the filet yield on the fish is only 20 percent.”

That low yield has been a sticking point with many commercial fish retailers and wholesalers who would otherwise be happy to carry the fish.

“Right now, it is mostly locals with boats who dive the reefs themselves to gather the fish and then sell them to fish markets,” Huth said. “You can clear 40-50 fish off a reef in 15 minutes, but the patch reef system in the Gulf makes it difficult to do very many in a trip.”

Huth, who is also a diver caught over a hundred pounds of the fish for the Sea Food Festival experiment in the waters off Pensacola Beach using Niuhi Dive Charters.

But the market is growing. Local restaurants, including Sake Café on Ninth Avenue, have begun offering lionfish on their menu, and grocery chain Publix also has it available via special order at their seafood counter.

HopJacks owner Abston has found a way to take even the smallest lionfish and make it commercially viable. He recently began a new business venture: Edible Invaders. 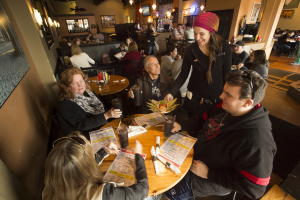 Edible Invaders, which began operating in August of 2015, is a company that according to their mission statement is “stepping outside of the box to bring delicious food with a purpose. Driven by our love for the Gulf waters we began our company to combat the lionfish infestation in our waters. Fueled by our compassion for the planet we decided to target invasive plant and animal life all over the globe.”

Edible Invaders’ key in utilizing lionfish is in its processing method.

“We have found a way to take small lionfish, as small as 3 inches, and make them usable for food products, such as our lionfish dip,” Abston said. “It’s already in my restaurants, and we’ve gotten commitments from several other hotel and restaurant groups to carry the product as well.”

Abston notes if the broadline commercial distribution of the product is successful, the product will be made available to the consumer as well. The environmental benefits of the using the smaller fish also appeal to Abston.

“We’re very serious about doing what we can to help and we also want to give back,” Abston said. “Twenty-five percent of the proceeds will go to the Coast Watch Alliance to benefit reef preservation.”

As for lionfish’s future, Huth said minimizing the lionfish’s impact on the environment will require both government and private resources.

“The market has to be created with the help of the public and business. Lots of people are already interested, and there is money to be made here,” he said. “In the public sector, we’re going to need bounties and other incentives to catch these fish.”

Rodeos, spearfishing, tournaments and other recreational activities could also help curb the spread of lionfish.

“You don’t even need a fishing license to hunt lionfish,” Huth said.

Huth said that an attitude of helping will definitely be a factor in the economic viability of lionfish products, and he’s interested in continuing to study that effect.

“Lionfish are a threat that extends from the Carolina coast, through the Caribbean and into the Gulf of Mexico,” he said. “With the results of this study, we want to expand our research effort.”

Huth hopes to receive grants to continue the work by setting up at other festivals and events around the Southeast and doing similar experiments.

“I’d like to create a lionfish food truck that will travel to more areas,” he said. “Ideally, we’d like to get a broader sample to see more results and help substantiate that people are willing to pay a premium for lionfish if they are helping the environment.”