Uriah, Alabama – Trying to find an Alabama sturgeon has been akin to searching for the proverbial “needle in a haystack,” according to Dr. Alexis Janosik, an assistant professor in the Department of Biology at the University of West Florida.

It’s part of the rarest and most endangered group of fishes in the world – so critically endangered that some even believe it could be extinct.

Only seven specimens have been collected since 1997. The last documented capture of the freshwater fish was on April 3, 2007 on the Alabama River by biologists with the Alabama Department of Conservation and Natural Resources. An Alabama sturgeon was last spotted near Robert F. Henry Lock and Dam on April 23, 2009. However, biologists were unable to net that fish.

Since then, not a ripple. Janosik, however, is attempting to find evidence that the Alabama sturgeon still exists using the emerging science of environmental DNA.

Janosik and Katie Vaccaro, a graduate research assistant at UWF recently traveled to a remote section of Smith Lake in Uriah, Alabama, to collect water samples, which were then taken back to the lab to filter to try to find the Alabama sturgeon’s DNA from scales, feces, urine, gametes – anything that leaves a trace of the fish behind. 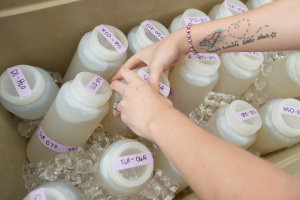 “This is a fish that migrates in the rivers to breed, and has reached a point of such rarity because of the impoundments on rivers – things like dams – and then it’s been harvested for caviar,” Janosik said. “So all of these things are fighting against sturgeon, and then it’s a big long-lived fish, taking a long time to reach sexual maturity.”

Janosik’s research also includes using environmental DNA to look for the Gulf sturgeon, a species that is federally listed as threatened but not quite as rare as the Alabama sturgeon. The research project is being funded by the Alabama Department of Conservation and Natural Resources, and Janosik is collaborating on the project with Mariah Pfleger, former graduate student at UWF, Dr. Carol Johnston, a professor at Auburn University, and Steve Rider, river and stream fishes program coordinator with the Alabama Division of Wildlife and Freshwater Fisheries.

“They were overfished. And then once the dams came in, that was kind of the nail in the coffin for these fish,” Rider said.

“You need to have that long stretch of free-flowing water, and in the United States anymore, that’s very hard to find, especially in the Southeast,” he said.

Janosik said the environmental DNA sampling process will also expand into sampling sediment from the river since sturgeon tend to dwell closer to the bottom.

“There’s been some recent studies that have shown that there is more DNA in the sediment than we are finding in the water,” Janosik said.

Environmental DNA will also be used to look for mooneye fish, Alabama shad and Freckle belly madtom, a species that is also widely thought to be declining in numbers, Janosik said.

The technology will also be used to determine if lionfish – a highly invasive species that is already wreaking havoc in the Gulf of Mexico – are moving into river systems as well, Janosik said.