Pensacola – A pair of University of West Florida professors shared stories and lessons learned from their careers Nov. 4 at the Rite of Passage lecture series event at the University’s Pensacola Campus. 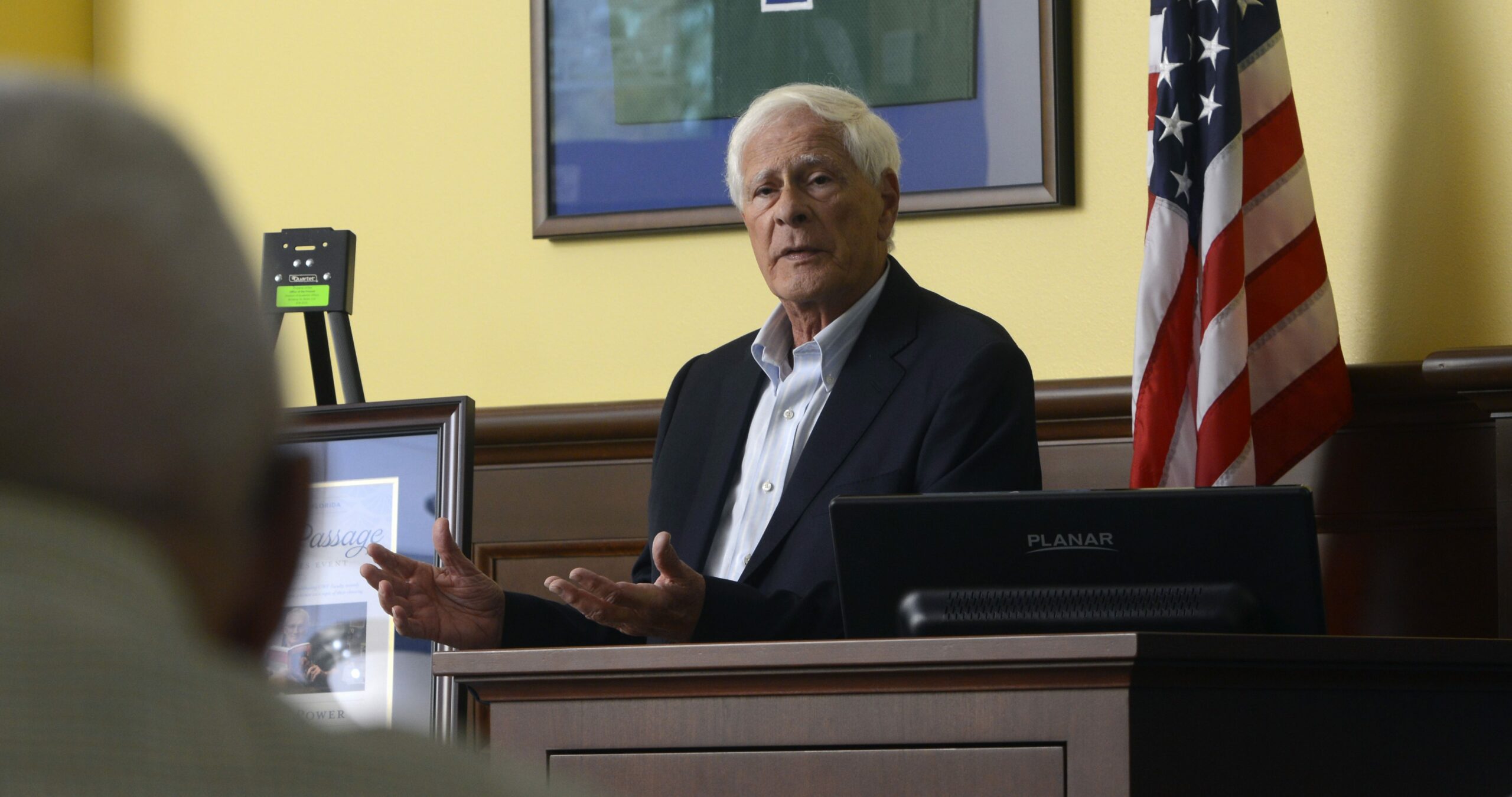 Dr. Morris Marx, UWF president emeritus, Trustees professor and professor of mathematics and statistics, and Dr. Nick Power, professor of philosophy, both spoke to peers, friends and family about their professional experiences as they moved forward in their careers and lives.

The Rite of Passage series celebrates UWF faculty members who reach full professorship. But, Marx, who served as UWF’s third president and has worked for decades in the classroom and administration, celebrated his retirement at the event. In his lecture, “Universities: Passages But No Rites,” Marx focused on three passages in his own life.

The first was the personal, based on the Italian saying “Il Dolce Far Niente.”

“It means the sweetness of doing nothing,” Marx said. “It’s something my wonderful wife and I have practiced and are very much looking forward to.”

The second was leaving his discipline, teaching. That tied directly to his third passage, the changes in universities in his more than 50 years of working in higher education. Marx said that universities have become important parts of their communities.

“Universities have made many positive changes but often receive very little recognition through rites of passage,” Marx said. “We’ve seen the rise of the research university doing important work, and universities really begin to embrace and encompass the public.”

Marx noted that “rites,” such as the G.I. Bill, which leveled the playing field for many veterans to get an education for the first time and desegregation, which brought people of color into higher education, were both viewed by the establishment as negatives when they occurred.

“These were not moments that were celebrated. In fact, they bred bitterness,” he said. “These were passages marked in the wrong way at the time.”

But, these changes made huge impacts in the long term. Marx said his biggest satisfaction comes from where universities, and UWF in particular, are today and his part in that change.

“I am proud of how much we blended three missions – teaching, research and public service – into one capsule,” Marx said.

Power is the first member of UWF’s philosophy department to get a full professorship since the department’s charter and says his 20 years of teaching have all been about instilling one concept in his students.

For many students, attaining that can be a daunting task.

“These are questions that go all the way back to the origins of the universe,” Power said “It’s easy to get lost.”

Power also discussed the concept of moral luck – that moral beings can’t be held morally responsible for forces beyond our control – and how it makes it difficult for students to understand their place in the universe.

“You don’t deserve where, or to whom, you are born,” Power said. “It’s my job to remind students of this.”

Another of Power’s areas of expertise is the philosophy of sex. He has served as a contributor and editor on the best-selling textbook, “The Philosophy of Sex: Contemporary Readings.” He became involved with the book by circumstance – or luck.

“I went through a divorce and I began asking myself, ‘What went wrong?’” Power said. “I read ‘The Structure of Love’ by Alan Soble in my quest for understanding.”

After reaching out to Soble, a noted philosopher at the University of New Orleans, the two started a dialogue, and Power invited him to UWF to speak to his class in his Philosophy of Love course.

“He floored the audience,” Power said. “He was hilarious.”

Soble became a mentor to Power and later asked him to contribute and edit the textbook. As a philosopher, Power is still questioning the “hopelessness of the casual nexus.”

“Where does luck begin?” Power asked. “And how do we account for the randomness of life?