Two University of West Florida researchers have joined a project to preserve and make public letters and other material written by Roger Taney, whose long, controversial career in American politics saw him serve in President Andrew Jackson’s cabinet and as chief justice of the United States. In doing so, they also hope to chart a pathway for future scholarly editions. 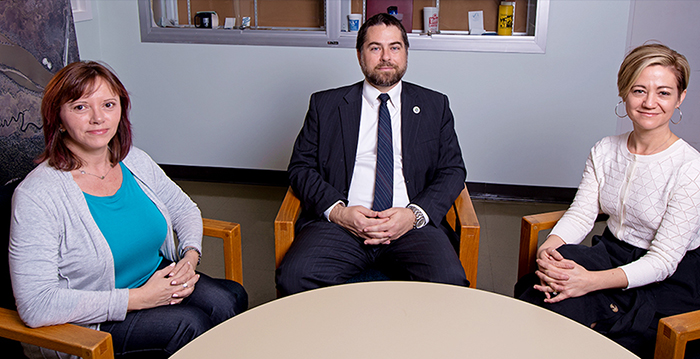 Two University of West Florida researchers have joined a project to preserve and make public letters and other material written by Roger Taney, whose long, controversial career in American politics saw him serve in President Andrew Jackson’s cabinet and as chief justice of the United States. In doing so, they also hope to chart a pathway for future scholarly editions.

Dr. David Ramsey, associate professor in the Reuben O’D. Askew Department of Government, and Dr. Kelly Carr, assistant professor in the Department of Communication, are working with the Massachusetts Historical Society to collect, organize and edit the letters. The letters will be available to the public through a website that will go into beta in 2022.

The three-year grant, provided by the Andrew W. Mellon Foundation and the National Historical Publications and Records Commission, has Ramsey and Carr developing governing structure, editorial rules and software for the historical society’s Primary Source Cooperative.

Ramsey and Carr collaborate with editors of three other collections that comprise the Cooperative: the John Quincy Adams Digital Diary, the Catharine Maria Sedgwick Online Letters and the Ellen Swallow Richards Papers. By the end of the project, letters from all four collections will be transcribed, published and cross-searchable.

“One of the exciting things about this grant is that we have an opportunity to pilot a new model for making collections like these accessible to a wider audience,” Ramsey said. “When you’re publishing a book, you get one chance to organize and present your material—once it goes to press, that’s it. In a digital environment, there’s an opportunity to create a more comprehensive and flexible edition, one that can then be customized by end users working from any place that has a Wi-Fi signal.”

Ramsey, who has an interest in antitrust law, has been studying Taney’s career since 2014. Carr, who specializes in Supreme Court rhetoric, joined the project in 2017. UWF graduate students are also working on the project.

Ramsey and Carr’s first volume of letters, “The Papers of Roger Brooke Taney: The Bank War,” cover Taney’s time with the Jackson administration. Taney, who was born in 1777 and died in 1864, was an influential member of Jackson’s cabinet, having served as attorney general and later as secretary of the treasury. He played an integral role in the Bank War, Jackson’s attempt to decentralize the national banking system, which led to the dissolution of the Second Bank of the United States.

“Taney’s letters are fascinating because they’re talking about these constitutional issues – where the balance of power should be and about the dangers of entrenched power politicizing the (Bank of the United States) and the press,” Carr said. “We know all this because we read American history. But to read discrete letters that worry about a particular moment and that use this big, evocative language is just phenomenal.”

After the Bank War, Jackson nominated Taney to succeed Chief Justice John Marshall on the Supreme Court in 1835. While serving as chief justice, Taney wrote the majority opinion in Dred Scott v. Sandford, a controversial decision that preserved the institution of slavery in the United States. The decision played a key role in putting the country on the path to the Civil War.

Many legal scholars consider the Dred Scott decision to be among the worst in the Supreme Court’s history. Taney’s reasoning and its consequences were so noxious that they discouraged many historians from studying the rest of Taney’s career on the bench, in the Jackson administration and in the government of his home state of Maryland.

“Preserving archival materials and making them public is important, because every piece yields a richer historical mosaic,” Carr said. “I think it is also important to study complicated and controversial figures. We need to know the internal reasoning and the evolution of notable people who had a huge impact on American politics, even as they invoked racist or otherwise problematic arguments.”

Ramsey and Carr hope that their project will perform a double public service: giving novice and professional scholars access to a vast array of 19th century resources, and charting a pathway for other scholarly editions to move from collection to transcription and publication.