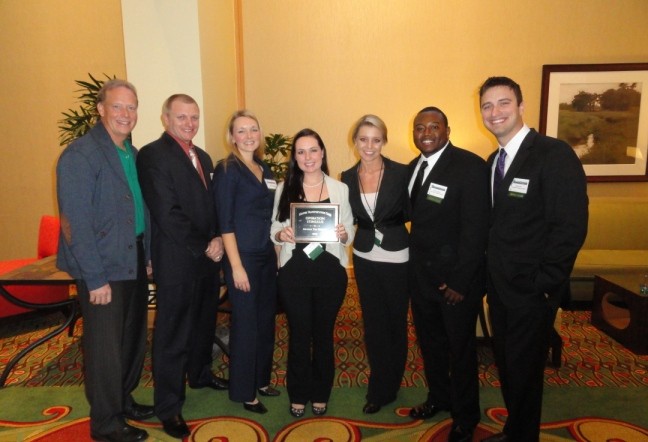 Team members are hand-picked each year from the marketing department on campus and the Marketing and Logistics Association (MLA) that professor Scott Keller founded six years ago. The MLA brings together students and local professionals in the logistics and supply-chain management field to network and learn from one another.

“I’m so proud of our team,” said Keller. “We have the most consistent track record of any team that has competed since the competition began 16 years ago.”

This is the team’s second first-place win.

This year, the team was tasked with the challenge of solving shipping issues for a corn and soybean processor in the Midwest that serves China. Issues included an increase in cost as well as shipping times to China, due to factors such as rail road congestion and lack of space utilization.

“We had to decide whether to move the facilities or not and prove why we made those decisions with transportation principles and cost analysis,” said Gary, a junior on the team.

Once in Denver, the teams had to present their recommendations to a panel of judges. After the presentation, the committee announced the top three teams and presented a twist to the original set of facts. The three teams would then have one hour to factor in this new information to their original recommendation, stripped of all resources including cell phones and lap tops.

“It was tough,” said Marquette. “We had to use everything we had learned up until that point and apply it to the twist.”

The team presented their final set of recommendations in a 20-minute presentation to a room of about 200 people.

“I was watching the judge’s faces, and they were just in awe,” said Keller. “I teach my students to not only stand up for what they believe in, but to be able to back it up with facts and figures, and they did exactly that.”

The competition is part of the Operation Stimulus annual conference, so the students got the opportunity to network with industry leaders. Each year, the goal is to place as many students as possible with jobs at one of the companies present at the conference.

“This experience always proves invaluable for the students,” said Keller. “They had the opportunity to mingle with upwards of 100 different logistics managers from all over the country, in addition to winning a national competition and proving themselves.”

Two seniors on the team interviewed with Crane Worldwide just one week after the competition and are waiting to hear if they have been offered a job.

“Even though there was a lot of sacrifice leading up to the competition, it was all worth it,” said Marquette. “It was the ultimate learning experience.”