Pensacola – While stories fill history books about immigrants who came to Colonial America and thrived, not as much is known about those who didn’t succeed. 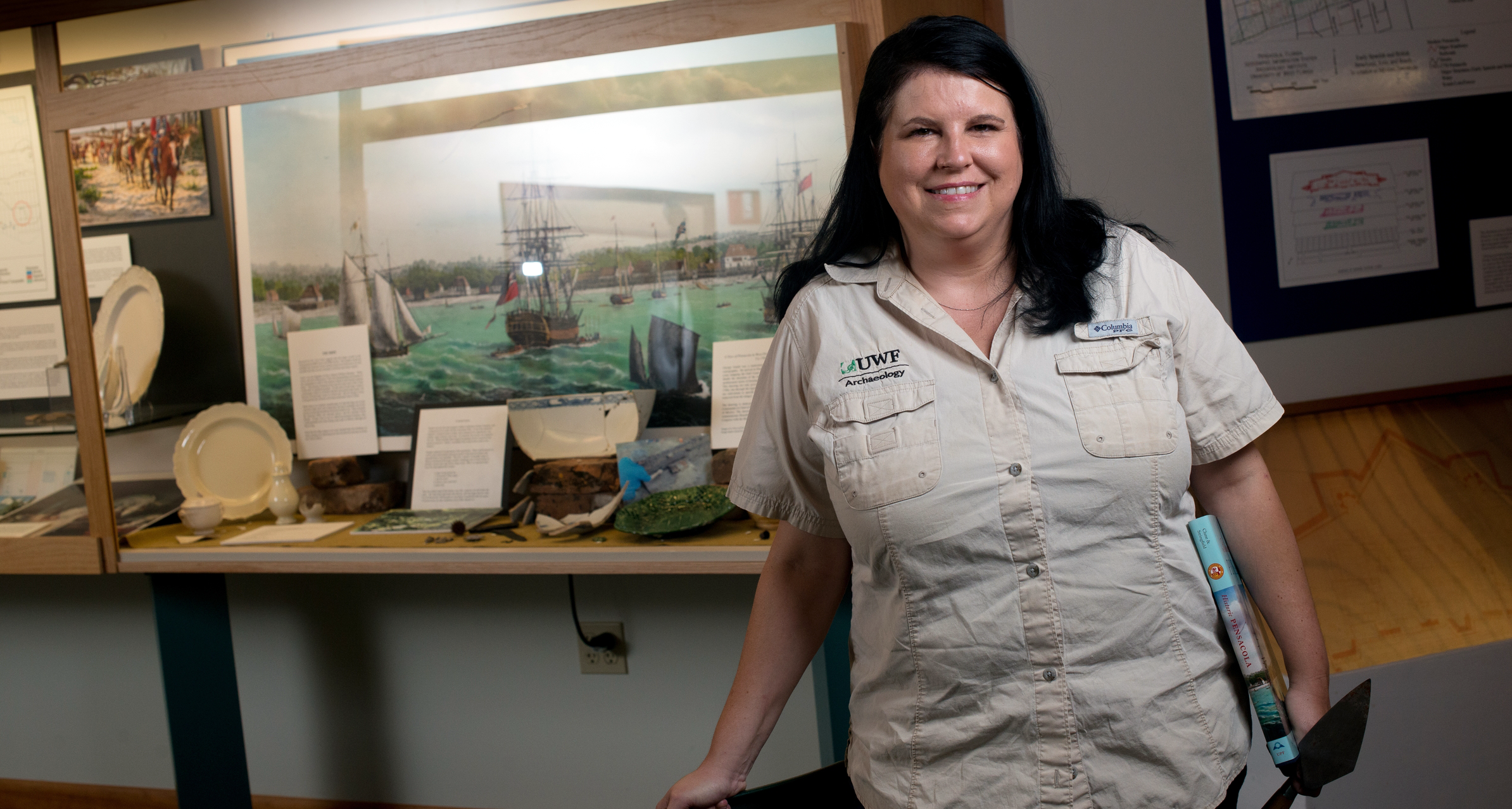 Through exhaustive research, Jen Knutson, a graduate research assistant with the University of West Florida’s Division of Anthropology and Archaeology, is telling the story of one of those ill-fated groups – a short-lived, small settlement known as Campbell Town that existed in British West Florida from 1766-1770.

Campbell Town was a colony established in Pensacola by Huguenots, who were French Protestants. After King Louis XIV revoked the Edict of Nantes in 1685, thereby declaring Protestantism illegal, Huguenots fled France in droves.

Seeking freedom from religious persecution, Huguenots immigrated to other countries in Europe, including the Netherlands, Ireland and England, as well as to colonies in America, Knutson said.

“Our colony was some of the last to flee France,” Knutson said of the Campbell Town settlement. “I’m not exactly sure when they fled France. They could have been in Britain 50 years before they came here.

“But they were destitute. They were seeking a place to go.”

Knutson said it’s not certain how many Huguenots initially came to Pensacola to form the settlement. She said she’s read estimates of anywhere from 40 to about 300.

“We don’t have a census of them until two years later in British documents from Pensacola during the meeting of the British assembly here,” she said. “They were supported by the British, The British gave them supplies. They gave them a food stipend.”

The origin of the name of the settlement is also unclear.

“We don’t know,” Knutson said. “There’s several people it could be. I have not figured that out, nor have any other scholars.”

The members of Campbell Town had plans to make and sell goods, including silk and wine, but they also suffered many hardships.

The British suspected them of hiding Catholics within the colony, Knutson said.

“I don’t think that they did,” Knutson said. “But the suspicion was there.”

Most of the settlers in Campbell Town would ultimately succumb to illnesses, including yellow fever and dysentery.

“Through my research I don’t think that any survived,” Knutson said. “Maybe a couple but we certainly don’t have any records. I haven’t been able to find out where they went, if they did.”

Studying historic maps and using Google Earth, Knutson believes Campbell Town was located somewhere around the Scenic Bluffs area. However, she said she won’t know for sure whether she has correctly pinpointed the exact location until she is able to perform an archaeological excavation of the area, which she hopes to get permission to do by late summer.

Dr. Ramie Gougeon, an assistant professor in the Department of Anthropology at UWF, who has assisted Knutson in her Campbell Town project said her research is important “because so little is known about this group of people who moved to Pensacola for a better life – a fresh start – and after just a short period of time were gone.”

“The documentary evidence is only a small piece of the puzzle,” Gougeon said. “The archaeology can help us understand what daily life was like for this community. Is the support we read about in the documents corroborated in the archaeological record? Can we find evidence of early successes or of strategies that might have led to their eventual failure? Campbell Town is a piece of Pensacola’s French connection that very few people know about.”

Knutson said she believes researching the lives of Huguenots who fled to America is important because of their many contributions, including to the Revolutionary War effort. Important figures, such as Paul Revere and Alexander Hamilton, were Huguenot descendants.

“What I really would like people to know is that they were significant contributors to American culture,” Knutson said. “It was a tragic situation that they didn’t survive here, but they did survive elsewhere.”

Field Work is a monthly series that highlights research and other scholarly activities being conducted by UWF undergraduate students.