The Haas Center recently completed a survey of residents of Santa Rosa County regarding replacing the Milton courthouse. While a majority of respondents feel the county needs a new courthouse, they remain divided on the best location and the ideal way to pay for its construction. 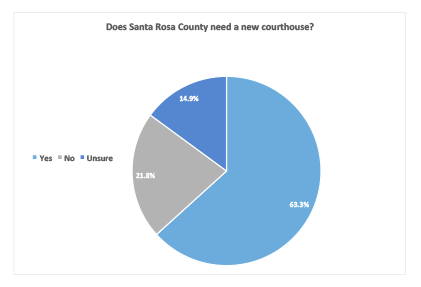 The existing courthouse, originally built in 1927, has been a topic of debate in Santa Rosa County for nearly 20 years as voters have defeated multiple sales tax measures to fund the construction of a new courthouse. The most recent measure was defeated by 819 votes in last August’s primary.

The survey’s aim was to capture how Santa Rosa County residents feel the courthouse issue should move forward, if at all, after that election. Santa Rosa County did not hire the Haas Center to conduct this survey.

More than 8o percent of the sample has visited the Milton courthouse, while 70 percent had done so within the last five years. The overwhelming majority (94.5 percent) of visitors reported that they felt safe during their visit. However, more than half (51.8 percent) had difficulty finding parking before their visit.
Approximately 63 percent of Santa Rosa County residents feel that a new courthouse is needed, while 15 percent are unsure or don’t know enough about the subject to report an opinion. However, over one-fifth (21.8 percent) of those surveyed think that the county does not need a new facility. 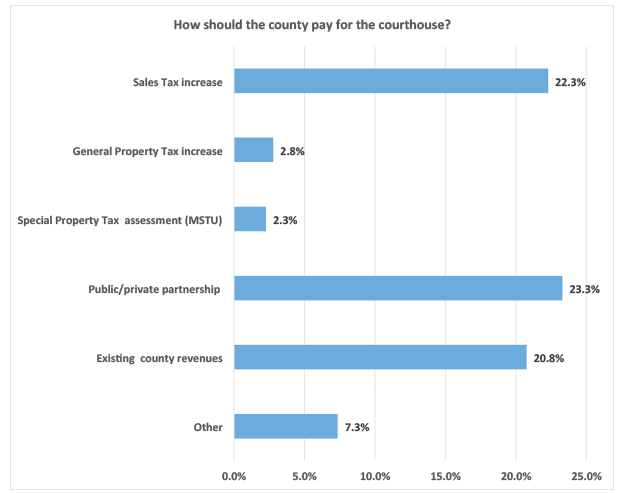 Respondents report various reasons for why the county should not finance a new building, including the perception that the current facility is fine as is (32.6 percent); the opinion that the facility should be renovated (34.9 percent); and concerns over expense (14 percent). “Other” answer options (12.8 percent) often included a combination of the aforementioned reasons.

The survey also included questions about the location of the proposed facility. Nearly half of respondents want the new facility to be located in the Milton city limits, while another 7.6 percent want it to be built near but not in Milton. More than 16 percent said that the facility should be further south in the county, closer to Gulf Breeze or Navarre. A handful of respondents preferred that it be built further west in the county (5.6 percent), further east (5.3 percent) or further north (1.5 percent). Approximately 14 percent of respondents didn’t know, had no opinion or preferred not to respond. 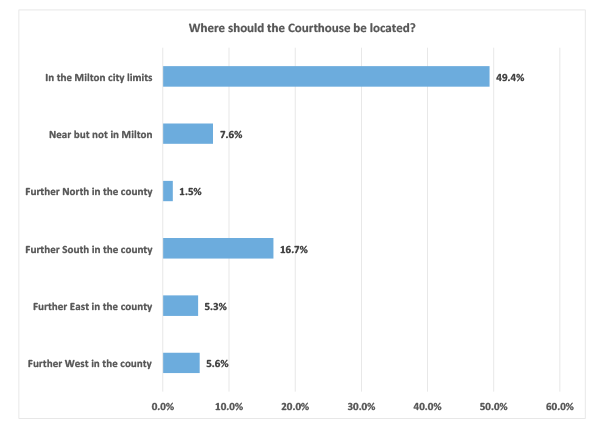 Opinions are also sharply divided over the best ways to fund the construction of a new courthouse. Respondents’ preferences were split roughly equally across three methods of payment: a public/private partnership, with the county offering rentable spaces to businesses (23.3 percent); a sales tax increase (22.3 percent); or drawing from existing county revenues (20.3 percent). Very few respondents were in favor of a general property tax increase or a special property tax assessment. Approximately 21 percent couldn’t identify their preferred way to pay for the construction or preferred not to respond. Seven percent of respondents identified “other” funding mechanisms. These options often included a combination of the above funding mechanisms, as well as suggesting the sale of county-owned properties or other types of private investment.

In total, 395 residents completed the Haas Center survey. This figure coincides with a 5 percent margin of error (+/-) at a 95 percent confidence level. While this was a random sample, the methodology did control for age in order to match the age distribution of the sample to the county’s adult population. The survey asked about voter registration status, participation in the August 2016 primary, property ownership and the ZIP code of the respondent’s primary residence. Just over 90 percent were registered voters, and 79 percent of these voters participated in the August 2016 election. Approximately two-thirds of respondents were home owners.

Amy Newburn is the assistant director of the UWF Haas Center at the University of West Florida in Pensacola.