When we look to judge how well our regional retail sector is performing, two immediate benchmarks present themselves: How do we compare with the rest of the state and with the nation as a whole? Looking at the nation as a whole, the monthly sales report from the U.S. Census Bureau presents an unadjusted growth of nearly 3 percent this year for the retail sector as a whole. However, a closer inspection of these numbers reveals major changes in consumption patterns from years past. The meteoric growth of non-store retailers (Amazon, home shopping, etc.) of more than 10 percent coupled with the stagnant sales from general merchandise stores (Dillard’s, Target, etc.) predict that sales from non-store retailers may pass general merchandise stores within the next two to three years. From the general merchandise category, department stores have suffered large losses with a decrease in total sales revenue of 5 percent this year compared with the same time period last year. Coupling this finding with the rapid growth from the restaurant/bar and health/personal care industries, we are witnessing a major change in the retail economy that many have been predicting for years. Not wanting to get left in the dust, companies like Wal-Mart are beefing up their online presence and shifting current sales focus. This shift in focus for Wal-Mart involves opening fewer new stores, giving current stores a facelift and offering new services like free grocery pickup.

Our inspection of the state and local economies uses taxable sales data from the Florida Department of Revenue and jobs data from the Quarterly Census of Employment and Wages. The figure below depicts seasonally adjusted sales growth for the retail sector as a whole as well as four of its major segments. 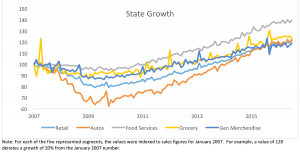 As seen in the figure above, the auto industry was one of the hardest hit during the recession. In Florida alone, sales dropped by nearly 40 percent from their pre-recession levels. However, it has also been one of the industries to fully recover and push future growth. While the retail sector has grown by more than 4.5 percent this year in Florida, auto sales have beaten that number by more than a full percentage point with growth of 5.6 percent comparing January-July 2016 with the same time period last year. Looking at our three MSAs, Crestview and Pensacola follow a near identical trend with the rest of the state. Sales bottomed out in late 2009 and have grown at a fairly steady pace as we exited the recession. For the most recent year, Crestview has even surpassed the state level with growth of more than 8 percent, while sales in Pensacola have cooled to a growth of 5 percent. The trend for Panama City largely followed the state as well until hitting a slump in 2014 and early 2015. On a positive note, auto sales have grown by 5.4 percent this year nearly keeping pace with the rest of the state. Overall, all of these state figures beat out national sales growth for the rest of the nation. 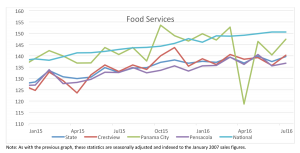 Source: Advanced Monthly Sales Figures by the U.S. Census Bureau Moving to the food services industry, we see that sales at restaurants and bars in the state have not been able to keep pace with the post-recession growth observed by the rest of the nation. All five groups began seeing growth starting in 2010 and follow a very similar pattern, but the nation rebounded a few months before Florida and has continued to hold that lead. Among the local MSAs, Panama City’s growth had nearly matched the rest of the nation for the past two years until the decline experienced in April. While this plunge is likely due in part to the ordinances passed aimed to curb rowdy college Spring Break behaviors, these numbers should be closely monitored in the upcoming months to see if sales have been able to fully rebound to their previous levels. As it currently stands, Panama City has only experienced a growth of 2.4 percent for the first seven months of this year compared to the same time period from 2015. While it still lags behind the other local MSAs in terms of total growth since 2007, Crestview has experienced the largest growth from 2015 of 6.4 percent and is the only one to match national food service sales growth during the same time period. Pensacola’s growth of 5.3 percent still beats the rest of the state, which only saw growth of 5.1 percent during the first seven months of this year. Taking a broader prospective to look at all retail sales, the numbers for our three MSAs largely mimic those for the rest of the state. After reaching a trough in 2009, the retail industry in Florida has grown by an average of more than 5 percent per year. This number has slipped to 4.5 percent for the first seven months this year, but these numbers still best the growth for the rest of the nation. Focusing on our three MSAs, Crestview and Pensacola have both outperformed the rest of the state with total retail growth of 6.4 percent and 5.3 percent, respectively. Panama City has only grown by 3.8 percent, but this is again likely an artifact of the new Spring Break policies. The numbers have responded favorably for the last three months, and overall yearly growth will likely surpass 4 percent as the Spring Break losses are amortized over the remaining months. Retail Jobs As displayed in the graph below, retail employment as a percentage of total employment in the state of Florida has remained relatively constant over the past dozen years. As jobs were lost during the recession and have been obtained during the current expansion, the retail sector has moved in accordance. As a whole, our state and local region are more dependent on retail jobs than the rest of the country, as retail only accounts for around 11 percent of all jobs nationally. Focusing on our local MSAs, data from the U.S. Bureau of Labor and Statistics shows that Panama City has lost more than 1,500 retail jobs since reaching a peak in June of 2015. However, as depicted in the graph below, there may be an alternate explanation that offers a much more positive outlook on the future. Panama City’s retail expansion from 2010-15 may not have been sustainable and may now be returning to an equilibrium level more in line with the state and the other MSAs in our region. 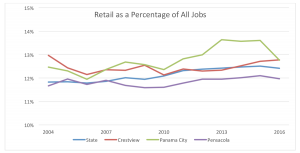 Source: Quarterly Census of Employment and Wages One problem resulting from our dependence on retail is revealed when we look at the wages for the region. Retail jobs generally don’t pay well. The graph below displays the median retail salary for our MSAs compared with the overall median salary for all jobs. 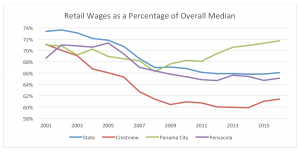 Source: Quarterly Census of Employment and Wages As we can see, wages in the retail sector have been unable to keep pace with the rest of the economy. Looking at the current numbers, median wages for retail range from $26,000-$27,000, while jobs in the utilities sector pay as high as $78,000, on average, in our region. Retail wages in Panama City are the only ones to keep pace with overall wage growth for the past decade. While at first glance one might expect this because of the lower overall median wages offered in Panama City ($38,000 compared with median wages of $43,000 in Crestview), retail workers in Panama City actually earn more than those from either Pensacola or Crestview. This positive signal may indicate that a majority of the recent layoffs occurred at the low end of the wages spectrum protecting jobs for individuals looking to make a career out of the retail industry. John Hartman serves as an economist with the UWF Haas Center at the University of West Florida in Pensacola.