Jennifer M. Feltman, a visiting professor in the art department of the University of West Florida, specializes in the art and architecture of medieval Europe. Among the many kudos she has garnered for her work is a National Endowment for the Humanities Stipend for her book “Moral Theology and the Cathedral: Sculptural Programs of the Last Judgment in Thirteenth-Century France.” The book, and a companion website featuring high-resolution images, will highlight the learning associated with the rapidly growing University of Paris and how this training of clerics shaped the visual imagery of cathedrals throughout northern France. 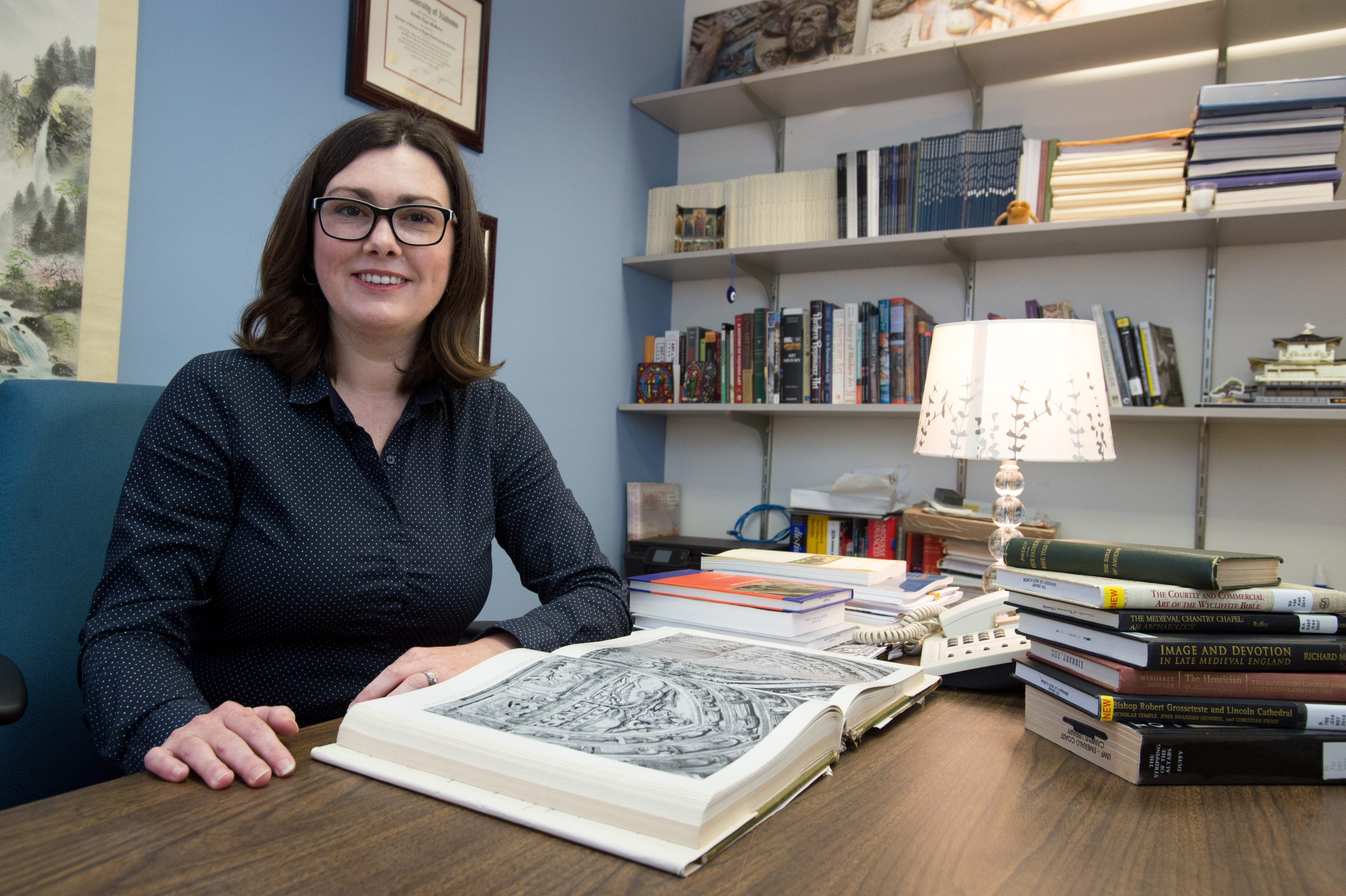 Q: Will you explain a little bit about the how the visual arts, architecture and religious thought intersect in your work?

Feltman: My research focuses on art and architecture in 12th- to 13th-century Europe. Broadly speaking, I am interested in how images and objects, whether manuscript illuminations, sculptures or architecture, transmit ideas. It happens to be that the images and objects on which I work address religious subject matter mostly concerning medieval Christian beliefs about death, the afterlife and final judgment. In an essay that is to be published later this year, I study how images of bodies and bodily metaphor in personal prayer books, known as books of hours, helped their users to contemplate an existence for the disembodied soul, allowing individuals to pray for the deceased and imagine their own future post-mortem state. Another research project has considered what sculptures of the Last Judgment on major cathedrals throughout France can tell us about how theological reforms spread throughout France in the 13th century. The Last Judgment was the most predominate theme depicted on the sculpted portals of cathedrals in the 13th century, and it wasn’t because everyone thought the world was about to end immediately. Instead sculptures of Last Judgment were meant to shape contemporary morality. I’ve been interested in how the moralizing tendency of Parisian intellectuals trickled down to the populace through images such as are depicted on these portals. Instead of simply studying the transmission of Last Judgment iconography via sculptural workshops, I consider how images and methods of biblical interpretation spread through networks of clerics who studied at the burgeoning University of Paris. This approach has helped me to explain how and why the imagery of the Last Judgment spread so quickly when it did. Clerics, trained in methods of biblical exegesis at Paris, took with them the moralizing focus of their studies when they took up new posts throughout France. They sometimes also took books with them, and ideas spread.

Q: Describe your interest in the long life of buildings and how this focus changes the way we look at, think about and write about art and architecture.

Feltman: I think about buildings as artifacts of lived interaction. By that I mean that they are structures, which bear the marks of their use, and those marks sometimes tell us interesting things about the development of social and religious practices in a specific location. Although we often label a building as Romanesque, gothic, or Renaissance, these structures are rarely the product of a single period, patron or architect. And, if such a building survives to the present moment, it is often because it has undergone restorations, and possible additions and adaptations. It may seem a little sci-fi, but if you think about it, buildings are like time machines that can allow us to travel back into the past. Another analogy can be found in geology: Just as the geologist examines strata to tell the long history of the earth, so architectural historian can examine layers of construction that accrue in a monument. My recent research has focused on the new meanings generated by the reuse of sculptures in a medieval monument. At Reims, I have argued that portions of the Last Judgment sculptures once intended for a public façade were reused and new sculptures made for a new location that was restricted to the clergy.

Dr. Feltman at the Abbey Church of St. Pierre, Moissac (France). The sculptures behind her depict the story of Lazarus and Dives (the Rich Man) and the punishment of the Vices of Avarice (greed) and Luxuria (lust).

Q: Will you describe your involvement in the forthcoming book of essays (including your own) about the North Transept of the Reims Cathedral?

Feltman: The idea for this book began with a problem: I was working on the Last Judgment portal sculptures at Reims Cathedral and needed to have a reliable chronology for their construction in order to make certain arguments about their meaning. To say the least, the north transept’s sequence of construction was complicated. Even a casual viewer can tell that it was altered a number of times. Over the years scholars have attempted to interpret the meaning of its imagery in sculpture and glass, sometimes in light of social conditions in the city of Reims. But much depends on how the social history coincides with the actual timeline of construction. I should mention that no document tells us explicitly when construction of the north transept took place or when plans changed. This has to be inferred from the building. I knew that an archaeological study of the north transept’s foundations had taken place in recent years, but it had yet to be published. So I wanted to get that archaeologist and as many art and architectural historians who have worked on this building (some for decades) in the same room to discuss our approaches and share evidence and methodologies. I contacted these scholars and invited them to present their research at the 2013 International Congress of Medieval Studies. The papers presented at that conference were then refined and few more contributors joined in as well. The product is the book, which I edited, that will be published later this spring. More info is available here.

Q: Will you tell us about another project, your NEH award and the associated book manuscript and website?

Feltman: I was awarded a 2015 NEH Summer Stipend for my book project “Moral Theology and the Last Judgment: Sculptural Portals of the Last Judgment in Thirteenth-Century France.” This book considers how the imagery of Last Judgment sculptural portals, made for the prominent cathedrals of Chartres, Notre-Dame in Paris, Reims and Amiens each applied aspects of contemporary moral theology in site-specific ways. The award enabled me to devote two full months last summer to work on the book and its companion website, which makes diagrams and hundreds of images of the portals freely available to students and scholars. The website is accessible here.  I was also able to conduct new research for a chapter that considers Apocalyptic and Last Judgment portals in the 12th century, thereby framing the rest of the book, which addresses the 13th century. Many of the 12th century portals are found on churches in south and southwest France. So I took a two-week trip to study them first-hand. I think I drove around 2,100 miles in that time. One of the most remote areas was at Carennac. To get to it, I had to drive over a 2-meter wide suspension bridge over the Dordogne River. On that trip, I documented each site, taking hundreds of high-resolution photographs. These have facilitated my research and a select few will be published in the book.

Q: Will you talk a little bit about the importance of doing primary site research?

Feltman: As an American scholar of medieval European works of art and architecture, I necessarily have a long distance relationship with the primary objects of my research. This includes the buildings themselves and medieval and post-medieval documentation that is most often kept in national and local archives and libraries in France. While digitization projects have greatly increased the speed with which I can access research materials, many items have not been digitized. And nothing can compare to the actual experience of a work of art or architecture. This is especially true for three-dimensional objects and even more so for architectural spaces such as portals that are necessarily designed to be seen when standing below and moving through them. When I visit medieval buildings, I spend a great deal of time observing them, walking through the various of spaces within, walking around them, going down into the crypt, and sometimes going up onto their roofs or into the attic. I take notes, documenting impressions and new ideas. And I take tons of photographs. These are the items I will have to study over the long months that pass until the next time I am able to be with that building.