Dr. Brian Hood is the program director and associate professor of Philosophy at the University of West Florida. He teaches philosophy of science, epistemology, and logic. He recently gave a talk titled “The Assumptions Our Models Betray” as part of the University’s Data Dialogues Lecture Series. 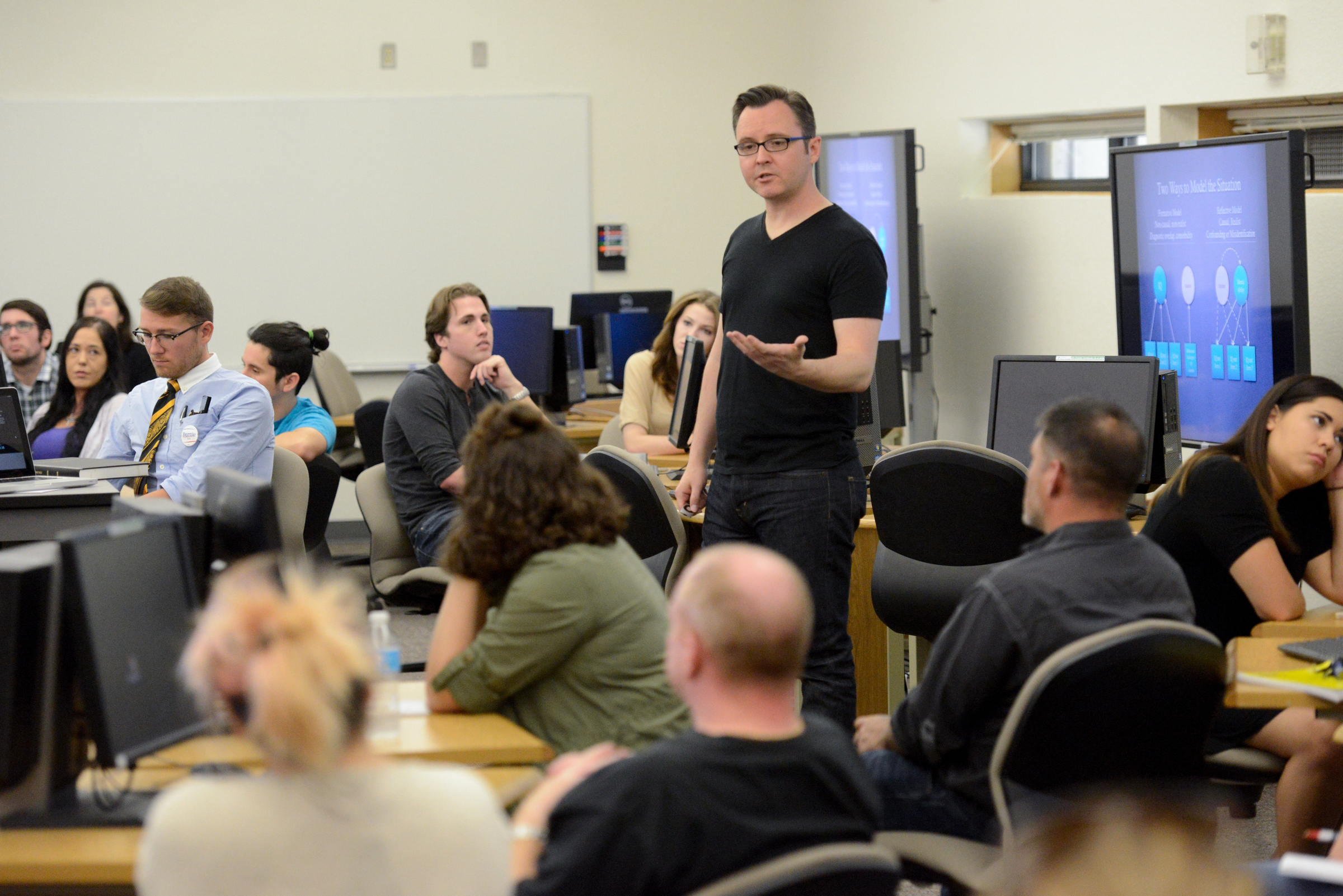 Q: How did you initially become interested in philosophy?

Hood: I had a very charismatic professor in my first semester of college. It was an honors seminar that I accidentally took (the class was called ‘Skepticism’) because I liked the title, and it just happened to be offered by a philosophy professor.

Q: What led you to pursue a career in teaching philosophy?

Hood: The primary motivation was to do original research in philosophy. I became impassioned about teaching during graduate school, having the opportunity in the summers to teach for Johns Hopkins University’s Center for Talented Youth. This is a program for gifted high school students. When you’re teaching logic to 12-16 year olds for seven hours a day, you can’t just lecture. You’ve got to keep them engaged. So basically it was a trial by fire to become a good instructor, and I did that for about a decade.

I think it was my experience at the Center for Talented Youth that cultivated the teacher in me. 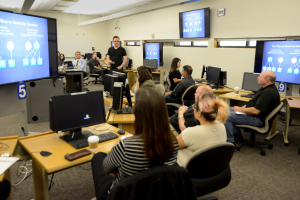 Dr. Brian Hood speaks from the Department of Philosophy lectures about “The Assumptions Our Models Betray” during the Data Dialogues lecture series.

Q: Much of your study has been in the field of mathematical psychology. What is the focus of your work in that area?

Psychologists use statistical models to represent certain features of cognition. For example, ability or personality, extroversion or introversion – all of that comes from statistical analyses.

So, my research looks at those statistical methods. And I’m interested in what kinds of assumptions are underlying the use of those methods – so why use that method as opposed to some other method.

Even if it’s not clear in the researcher’s mind why she would choose those methods, there is some reason there, even if it’s a tacit bias. I don’t mean bias in a bad way, but just, you were taught a certain way or you think that one feature of cognition causes another so you choose a method that reflects that assumption.

So, I’m interested in figuring out what the underlying assumptions are in the selection of statistical/psychometric models.

Q: Tell us about your work in the philosophical foundations of psychiatry. What are you focusing on?

Hood: One of the things I’ve been looking at is the problem of co-morbidity in psychiatry. The problem of co-morbidity is that if you have a single psychiatric diagnosis, you are much more likely than would be expected by chance to have another diagnosis. My work explores what are the possible causes of co-morbidity. So it could be something as simple as what’s called diagnostic overlap. Some of the symptoms for depression just are some of the same symptoms for generalized anxiety disorder, so maybe that explains why those two disorders are highly co-morbid. It could be what’s called “clinical bias” or “referral bias.”  The people who go to psychiatrists tend to be the people who have the problems. So there’s sort of a selection bias there, which may inflate co-morbidity rates relative to the actual frequency of co-morbidity in the population as a whole.

When a psychiatrist makes a diagnosis, I’m interested in whether psychiatrists are operating with something like the medical model of the disorder where the behaviors are indications of some underlying cause, or whether the psychiatrist approaches mental disorder like we think of the common cold. So the common cold just is a set of symptoms. There is a virus that’s causing them, but when I diagnose you with a cold, I’m not diagnosing you with a virus, I’m saying you have a runny nose and all that stuff.

So, some people take that approach to psychiatric disorders, that a psychiatric disorder is nothing but a collection of behaviors. Other psychiatrists see it as the behaviors are caused by some underlying thing. And so if you treat the disorder, you want to treat the underlying cause and not the symptoms. The other account, you treat the symptoms because there is nothing to talk about other than the symptoms; the symptoms are the disorder. Both views are compatible with the statistical data, it’s just the outcomes for clinical practice are very different in terms of, for example if someone’s diagnosed with learning disabilities or an intellectual disability, the kinds of remediation you’re entitled to, the kinds of drugs that you can have access to. And of course there’s a lot of pressure to give diagnoses because you can’t have insurance cover psychiatric treatment unless you have an official diagnosis.

And then very recently I’ve become interested in pseudo-scientific practices in psychiatry, certain practices that have been debunked for years, but nevertheless are still employed.

Q: What was your talk ‘The Assumptions Our Models Betray’ that was given at the Data Dialogues Lecture Series about?

Hood: That talk was aimed at introducing the audience to what philosophers of science have to contribute to methodology and the behavioral sciences. I looked at models generally. So I talked a bit about what models are in the sciences. Then I looked at how models are used in psychopathology, so when we’re diagnosing mental disorders. And then I looked at how the selection of models, say models of intelligence, constrains what your theory can say about intelligence. It’s not just, pick whatever model you want as long as it fits the data. No. Eventually that model has to bump up against substantive psychological theory and there could be a conflict there.

So the talk was aimed at showing, in an accessible way, the unique contribution that philosophy can make to substantive debates in science.

Excerpts from the Experts” is a monthly series of interviews with subject matter experts at the University of West Florida.