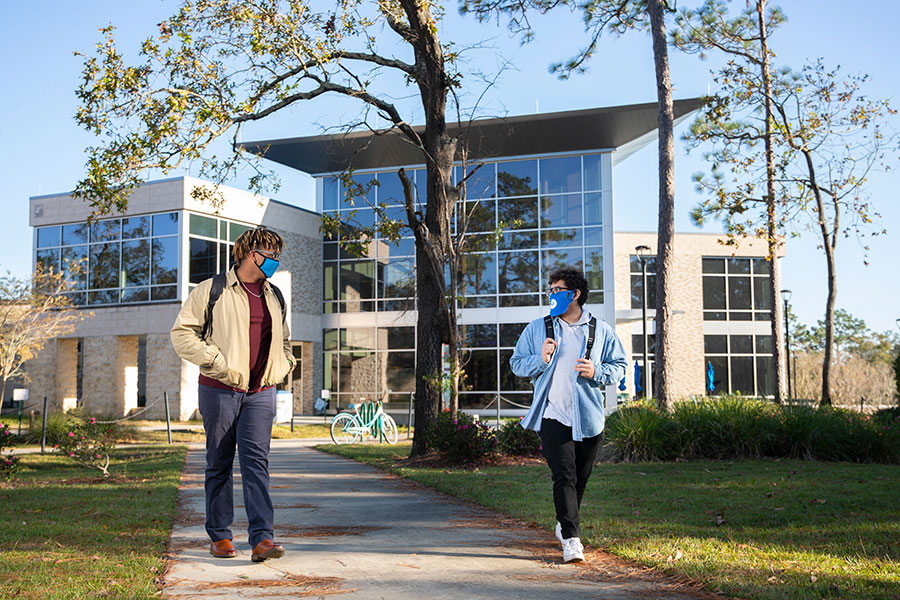 Yes, Mr. Dickens summed it up quite nicely; yet, when I look back on this most extraordinary year, I can’t help but marvel at all we achieved at The University of West Florida.

We launched the new year in January with sails flying as the newly named NCAA DII national football champions with Austin Reed named National Freshman player and Pete Shinnick, Coach of the Year. UWF online programs earned high marks in U.S. News & World Report rankings, a designation that paid off tremendously later in the year when COVID forced us all online.

Our beautiful campus gained recognition when the UWF Camellia Garden won listing as an American Camellia Trail Garden in March, making us one of only 57 in the United States. Later that same month, we were named a Tree Campus USA for our efforts to promote healthy trees and student involvement.

By April, the coronavirus had our full attention. Faculty helped each other pivot to online instruction.  Students and staff teamed up at the Sea3D lab to manufacture face shields free of charge for local healthcare workers.

In May, a COVID-19 drive-through testing site opened on campus, used heavily by local residents. We turned lemons into lemonade with our first Virtual Commencement ceremony when it became clear we could not celebrate together in person. Lt. Gov. Jeanette Nunez honored the graduates with beautiful, heartfelt congratulatory remarks.

Increased summer enrollment kept us busy online in June and July while we planned for the Fall 2020 Return to UWF. Meanwhile, the UWF teacher education programs received CAEP accreditation for another five years, guaranteeing a steady supply of professional teachers for area schools. In anticipation of a busy election season, the Center for Cybersecurity provided security training for elections officials.

Returning to school in August looked a little different this year, with masks and sanitizing protocols for anyone on campus. We welcomed our most academically talented freshman class in the institution’s history, with increased freshman and graduate enrollment.

Hurricane Sally punched us in the nose in September and we watched with concern as a conga line of storms lined up in our path. A little bad weather didn’t diminish the thrill of an anonymous gift to create a School of Music named after beloved former faculty member Grier Williams. A third consecutive HEED award for excellence in diversity went nicely with U.S. News & World Report’s ranking as a Top Public School—Regional South for the second consecutive year. I’m especially proud that UWF was again recognized nationally as a Great College to Work For.

We doubled down on safety in October, offering free, anonymous online mental health services for our students. Another first, the virtual State of the University address left not a dry eye in the house with its closing video featuring one of the winners of our Songs of Impact competition. Faculty and graduate student researchers identified U.S. counties with high rates of COVID-19 through sophisticated statistical cluster analysis modeling. Other faculty members provided useful insights to media inquiries on the impact of the virus on the elections.

We sent students home for the November Thanksgiving holiday with a bundle of sensible advice for staying safe and protecting their loved ones. As added insurance, we wrapped up the semester completely online to avoid sparking a post-holiday outbreak. I was glad the UWF Board of Trustees and the SUS Board of Governors extended my contract for another year. I’m grateful to serve a University I love in these most challenging of times.

December and a long winter break will give us time to reflect on lessons learned this year and plan for 2021. I expect to see more life on campus in the spring as we resume a more normal schedule. With apologies to Dickens, I would have a hard time comparing 2020 to the “worst of times.” I prefer to think of the past year as a test of our resilience and courage. With the steadfast support of our community, UWF passed with flying colors. Happy New Year and Go Argos!

Most read in President's Blog