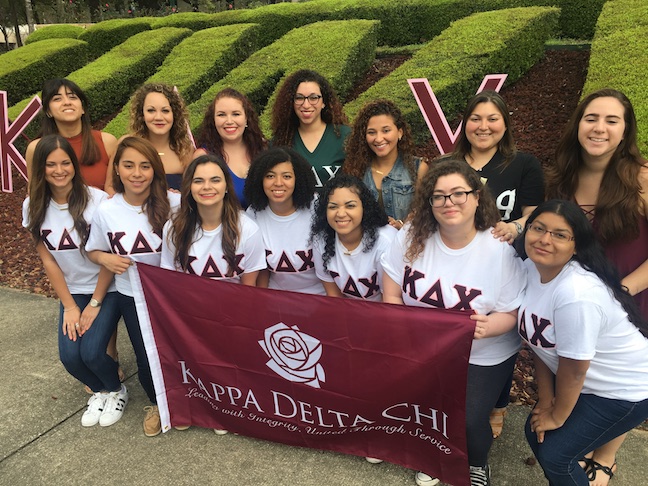 Veronica Lucena, Kappa Delta Chi Sorority Inc. vice president of expansion, said the UWF colony will report directly to the Kappa Delta Chi National Colony Development Officer, and under her supervision, “they will be guided in fulfilling all colony to chapter requirements and setting a strong foundation in becoming a future chapter of KDChi.”

Frazier credited the students for actively participating in events while forming a colony.

“I am really excited for them to join our community,” Frazier said. “Their women have been go-getters. For having seven women, their presence has been pretty incredible.”

Lucena credited Avelar for initiating contact with Kappa Delta Chi. She said Avelar first spoke to Claudia Salinas, Kappa Delta Chi external recruitment officer, in April of 2016 about her interest in bringing the sorority to UWF. Avelar and Anaya then recruited their fellow founding members.

“Deni and the other women recruited other students who they felt were a good fit for KDChi and exemplified our values,” Lucena said.

Avelar researched other Latina sororities before deciding on Kappa Delta Chi. She said she appreciated that the sorority values unity, honesty, integrity and leadership. Avelar shed tears of joy at the official ceremony.

“It was a long process,” she said. “We started recruiting a year ago exactly. We had the persistence to overcome all of the obstacles. It taught us a lot about ourselves and about sisterhood. We are super excited to start something new at UWF and leave our legacy.”

For more information about Fraternity and Sorority Life, visit uwf.edu/fsl.