Cadet Hakeem Douglas, a student in the University of West Florida Army ROTC program, was named Honor Graduate at a Basic Airborne Course in Fort Benning, Georgia. The course took place from June 24 through July 17, and Douglas was selected as best in class in a group of more than 400 soldiers and cadets. 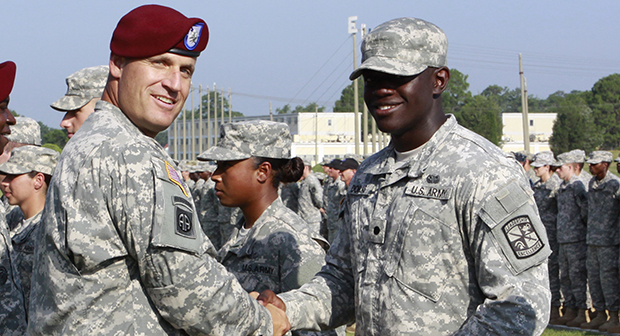 “This was a real military experience for me,” said Douglas. “I never saw myself doing this three years ago when I started here at UWF, but it was huge for me. I learned patience, to enjoy every moment and to absorb all I can.”

Douglas is an Army ROTC scholarship recipient from Orlando, Florida. He is a junior majoring in public relations with a minor in military science, and he is on track to graduate in the spring of 2017.

“Military units and ROTC programs across all branches of the military send their most qualified people to Airborne School, to include Army Rangers and Navy SEALs,” explained LTC Henry Delacruz from UWF Army ROTC. “Cadet Hakeem Douglas has demonstrated that not only can he perform with these officers, non-commissioned officers, enlisted soldiers and cadets, but lead them as an honor graduate. As an honor graduate he’s considered the ‘best of the best,’ and that’s all due to his dedication in preparing mentally and physically for this demanding course, and due to the training and preparation he received in UWF Army ROTC.”

“UWF’s Army ROTC program is one of the best out there,” said Douglas. “They are good people with a great support system. It’s given me confidence, and I’ve loved every second of it. It’s also given me plenty of opportunities. I don’t think I could have done this at any other university.”

For more information about the Army ROTC program at UWF visit uwf.edu/armyrotc.