Pensacola – A violin concerto, a study of water quality in Escambia County, and research looking at the muscle fatigue baseball pitchers experience may not have much in common. 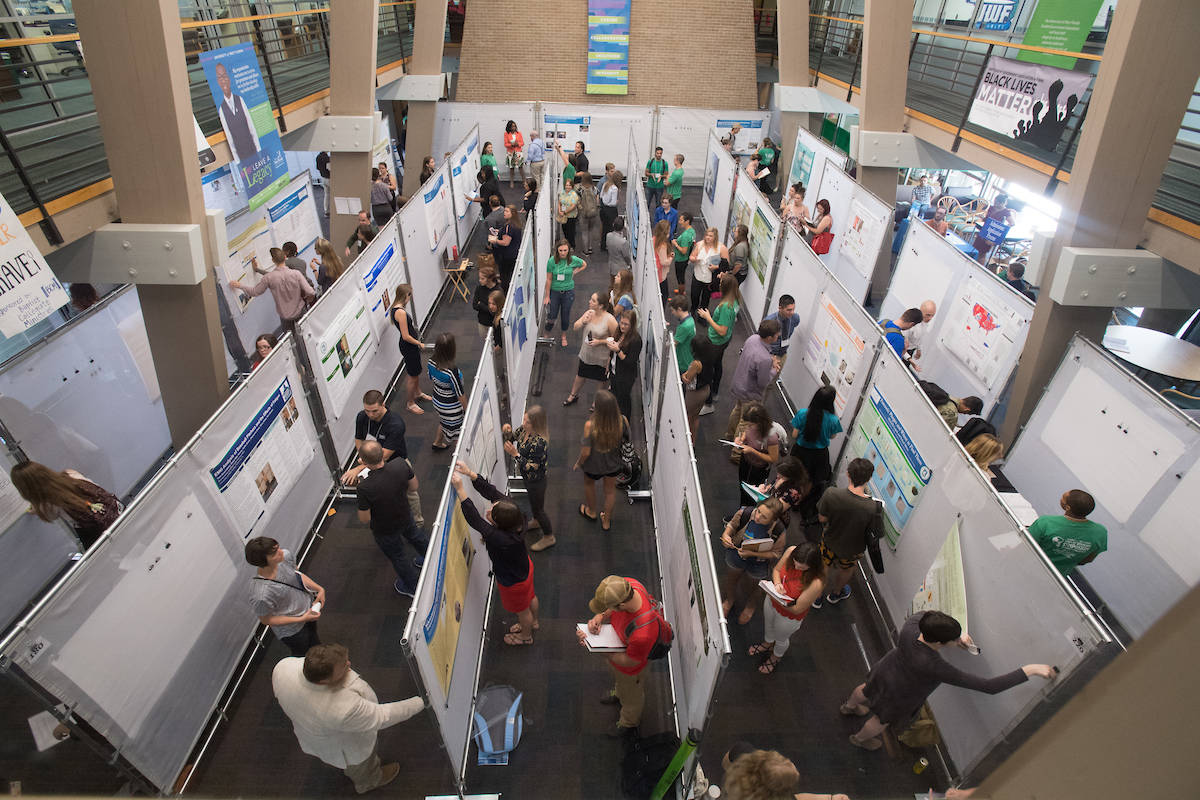 But, all are examples of the exhaustive and collaborative work done by University of West Florida students and faculty, which were on display at the 2017 Student Scholars Symposium and Faculty Research Showcase held April 20.

Dr. Allison Schwartz, director of the Office of Undergraduate Research, which organizes the annual symposium, said her office wanted to broaden the format of this year’s event to better accommodate the wide variety of academic disciplines on campus.

“We kind of threw out the format a little bit, and really that was because the message I was getting around campus was that a poster doesn’t work for non-science people,” Schwartz said. “It’s not how their professional presentations are done.”

So in addition to a plethora of poster presentations, this year’s symposium also featured oral presentations, student and faculty panel discussions and even musical performances. All five colleges were represented, Schwartz said.

“It’s exciting,” Schwartz said. “I feel like (the Office of Undergraduate Research) opened the doors, and everybody came.”

The location for this year’s symposium was also moved to the University Commons to garner more interest from students who were not presenting research at the event.

“My goal was to bring students in who were not doing research so that that they could see what is possible,” Schwartz said.

In addition to the gamut of research that was presented at the Commons, the Center for Fine and Performing Arts hosted a concerto competition showcasing piano, violin, trumpet, vocal and other musical performances.

“I think what’s special about including the arts is teaching our students what creative activities and scholarly research means in their field, understanding better that what we do every day is research,” said Dr. Sheila Dunn, chair of the Department of Music.

Among those presenting research posters at the Commons was Laura Walters, a senior majoring in environmental management, who sampled water quality at four locations in Escambia County. Her research showed that bodies of water near highways tend to have higher levels of inorganic nitrogen and phosphorus.

“If I were take this to the county and recommend anything to them, I definitely would look for better ways that we could mitigate runoff from the highways,” Walters said. “I think that’s one of the largest sources of the pollution that we’re having in the waterways.”

Ian Hamilton, a graduate student in the public history department, presented a poster that detailed his effort “to marry the professional standards of public history with the novel post-Ken Burns approach to documentary filmmaking” through his production of two films.

His first, “Frida Kahlo: A Documentary,” about the famed Mexican painter, was screened as part of the symposium.

Hamilton is now working on a second documentary, “Pensacola Punks,” which details the city’s punk-rock scene. He interviewed musicians, artists and business owners who are involved in the punk scene in Pensacola. Those interviews, along with a collection of magazines and concert flyers, will be part of an archive at the Voices of Pensacola that will be available to any researcher.

“I want it to be the spark so other people can expand on it, give me their information, because you can only talk so much about it within a 30-minute film,” Hamilton said.

Tom Dusenberry, a senior majoring in exercise science, presented a poster on his research in which he is performing an electromyographic analysis of college baseball pitchers to see how fatigued they get during games and how it affects their performance. He is studying several muscles in the pitcher’s throwing arm.

“If we found that maybe one specific muscle fatigued a lot faster than others, maybe we could strengthen that muscle when we do a training protocol and it will prevent the athlete from causing overuse injuries or ruining their technique at the end of the game so they could pitch longer,” Dusenberry said.

Schwartz noted the growth and enthusiasm in this year’s symposium. There were 271 poster presentations compared to 183 at last year’s event.

“I think there’s just been a sort of general culture shift that’s starting across campus about how important research is and we’re starting to build that in as part of our cornerstone,” Schwartz said.