Pensacola – Jim Jipson has served as chair of the University of West Florida’s Department of Art and was the first director for the Center of Fine and Performing Arts. His stunning artwork has been featured at galleries across the country. 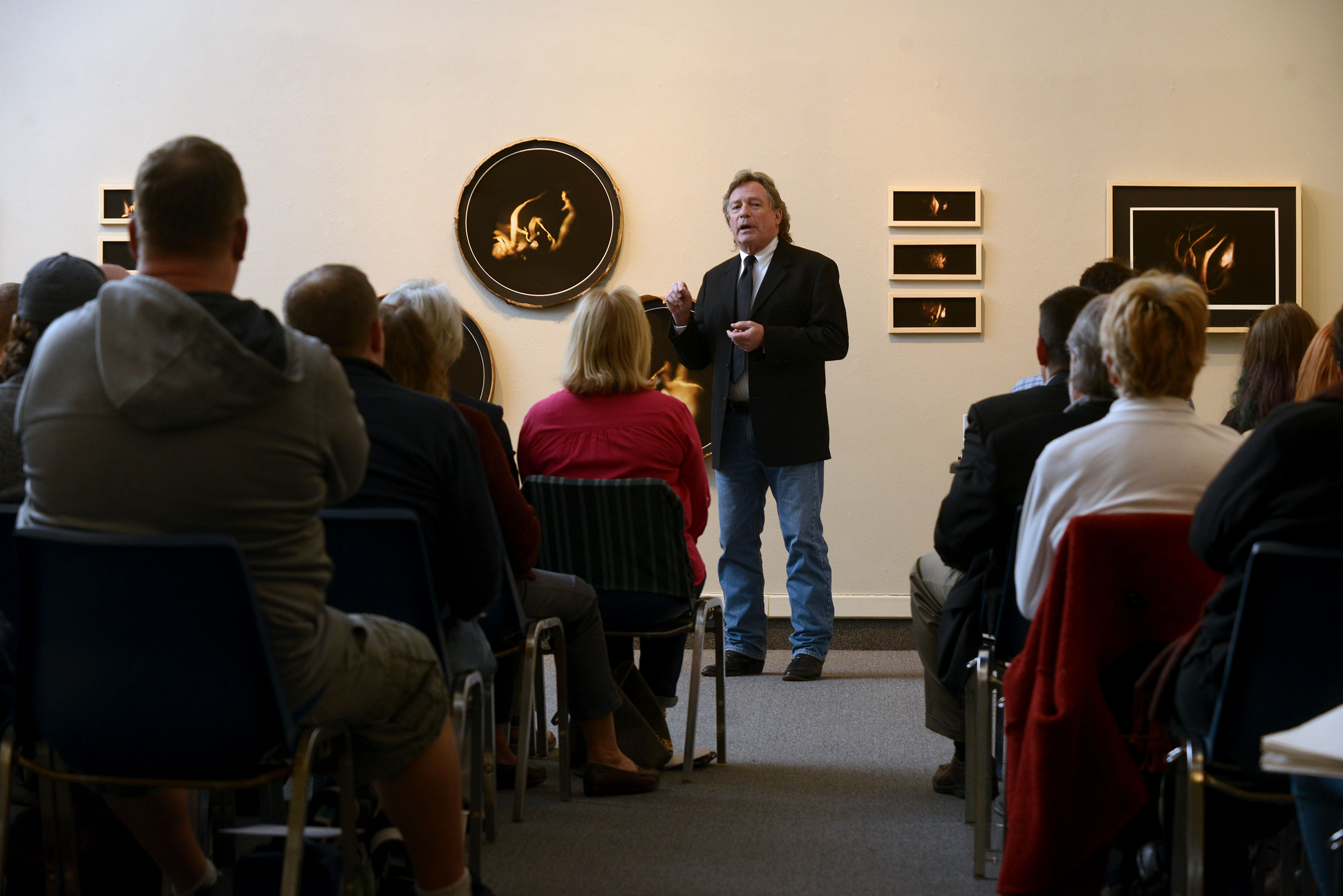 On Friday, Jipson’s family, friends and fellow UWF faculty celebrated another of his many achievements – earning the position of full professor. Jipson was honored for his promotion during the second Rite of Passage lecture series of 2016 held at The Art Gallery at UWF.

“This is an event that really signifies a milestone in one’s academic career,” said George Ellenberg, vice provost of UWF.  “To be named a full professor in the academic world is, in a sense, what we all aspire to do.”

Jipson, who has taught at UWF since 1987, gave a presentation titled “My Endless Quest for the Chthonic.”

By definition, the chthonic are the underworld passageways where the Greek and Roman gods were born, Jipson said.

However, Jipson said his interpretation of the word is different.

“This is a metaphor for us seeing beauty inside the darkness,” he said.

Jipson’s quest for the chthonic is displayed through a projector he invented. The device projects images of three-dimensional objects that move in both a repetitive and non-repetitive way. In many of his works, images of seeds, sticks and twigs that he found around his house are displayed.

“He allows his audience to see actions within the projector so they think they know what it is that they are about to see,” said Dr. Steven Brown, dean of the UWF College of Arts, Social Sciences, and Humanities, in his introduction of Jipson at the lecture series. “However, they will not see what they imagine.”

Jipson said much of the work in the art department deals with the subconscious mind. He said the projectors are “my way of fooling myself into not using too much of my conscious mind in order to create an image.”

Jipson was born and raised in Detroit and earned a master of fine arts in printmaking and drawing from Michigan State University and a bachelor of fine arts from Wayne State University. He received the Polaroid Artist Support Grant in 1986, a fellowship in photography with the Southern Arts Federation National Endowment for the Arts in 1993 and a visual arts fellowship at the National Museum of American Art in 2001.

Jipson said he began his career at UWF with a one-year contract.

“The students who are here, you know that I love teaching. and I love you guys. And you incredibly important to me,” Jipson said to the audience.

Through both his artwork and teaching, Jipson believes he channels his two grandfathers, one who was a commercial illustrator and the other a mechanical engineer who developed an addition to the steam engine.

“Because the arts are not at the periphery of education,” Jipson stressed. “They are the core of education and humanity.”