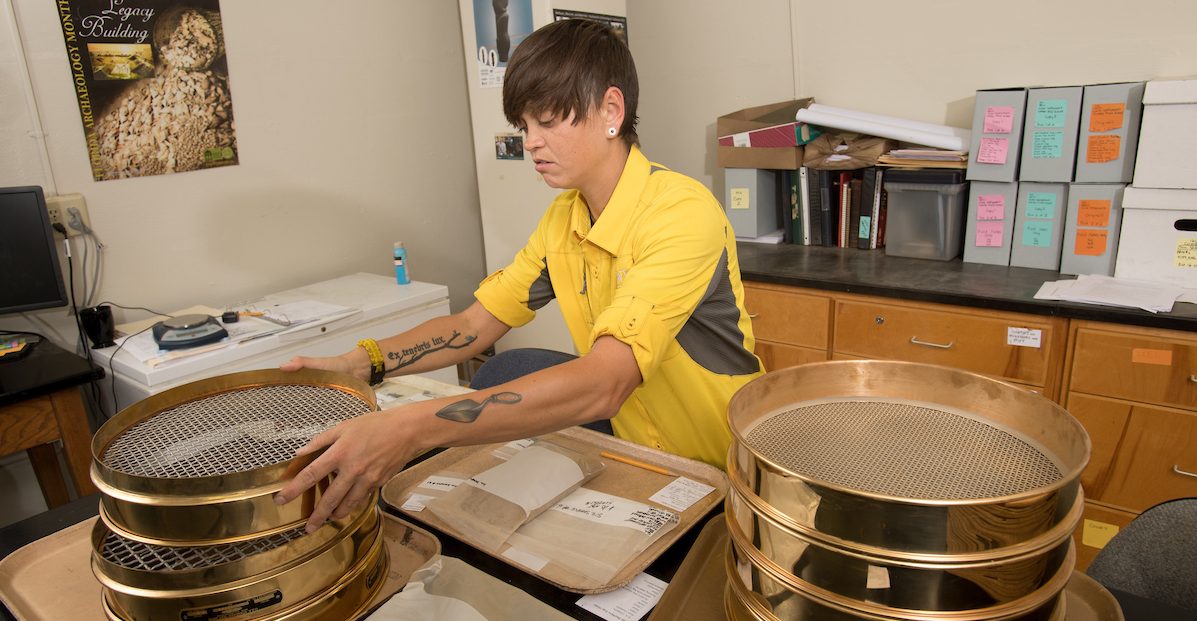 Since the mid-1960s, the standard for the recovery of plant remains from archaeological sites has been the flotation technique.

“It is as simple as just placing a sample in a tub of water and skimming off what floats to the top,” said Dr. Ramie Gougeon, an associate professor in the Department of Anthropology and Archaeology, explaining the process.

While flotation method is both inexpensive and efficient, some ethnobotanists say it can damage the delicate materials recovered.

“In places where the archaeological sites have been dry for a long period of time, taking the fragile botanical materials out of the ground, getting them soaking wet in a float tank and then drying them out again may cause them to swell, crack, deteriorate and then dry again and break apart,” Gougeon said.

Those ethnobotanists have recommended an alternate method to recover these samples, called dry sieving, which involves passing the collected materials through a series of nested screens that progressively get smaller.

However, that method is much more labor-intensive, capturing every rock, stone and particle of sand and as the screen sizes get smaller.

“It’s much more challenging to do the dry sieving,” Gougeon said. “It may not be damaging the samples, but it took just shy of 97 hours to process one sample.”

Compare that to the flotation method in which processing the sample took only 15 hours.

“It’s a lot easier to go through it, because we’re not keeping as much of the sediment, compared to the dry sieve it might be one-one hundredth of the sediment that we have to go through,” said Jenni Baggett, a senior majoring in anthropology, who is helping Gougeon perform the research.

Baggett received a grant from the UWF Office of Undergraduate Research to take part in the study. She has made presentations at UWF, as well as at a conference Memphis, Tennessee, and in Jacksonville at a meeting of the Florida Anthropological Society about the research.

The study that Gougeon and Baggett are conducting tests the flotation versus the dry sieving method using samples gathered from two sites on Pensacola Bay. One of those is the site where explorer Tristán de Luna y Arellano attempted to establish a Spanish colony in Pensacola in 1559.

“We’ve got two samples from the Luna site, one that’s right on the water and once that’s a little further inland, and then we’ve got one sample from a site that’s right on Santa Rosa Island between sand dunes,” Gougeon said.

The samples collected by flotation and by the sieve methods will be sent to archaeobotanical analysts for them to perform a double-blind study.

“They won’t know if they got a dry or a wet sample,” Gougeon said. “They are supposed to tell us not only what it is, but if it was damaged or appears to be of a lesser quality.”

At the conclusion of the botanical study, the results will be compared to evaluate any differences between the samples.

“Basically the question is, is the time worth the effort?” Gougeon said. “Because (the dry sieve method) is so prohibitively expensive in terms of time that at the end of the day if we can’t tell a qualitative difference between this and floating it, we’re going to quit doing this immediately and we’ll go to the float.”